Film Courage: How did you go about developing these vampire characters?

Geoff Ryan, Writer/Director: I kind of have parts of myself in all of them. Vanja [Vanja Kapetanovic who plays Jure Alilovic in Geoff’s BLOOD FROM STONE] his performance as Jure, he brought it to a whole other level. But there’s that part of me that is impulsive and very much about living in the moment, doing things you regret, not understanding why you’re perceived a certain way (all that kind of stuff).

Darya’s character [Gabriella Toth who plays Darya Nicolayvna] again deals with a lot of that self-repression so in a way there’s so much of me in all the characters. I think that’s just essential. There’s a line that is told to every writer and it’s a dangerous one where they say Write What You Know and too oftentimes I find that makes writers go with the most obvious…(Watch the video interview on Youtube here). 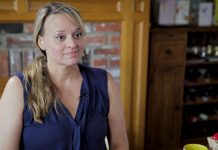