Film Courage: Is there such a thing as story intuition?

Aaron Fradkin, Writer/Director/Youtuber: I would lean to saying yes. I think certain people do have something innate within them where they just understand character and they understand the direction that stories need to go in. I think other people might require a little bit more work to get there.

I’m not just saying that some people have it and some people don’t. I just think some people maybe have a little bit more of an advantage based on where they’re from or where their mind was focused at a young age.

That seems like a very scientific answer to a metaphysical question.

Film Courage: Where do you think you fall on this spectrum?…(Watch the video interview on Youtube here).

Check out the trailer to Aaron Fradkin’s movie ELECTRIC LOVE 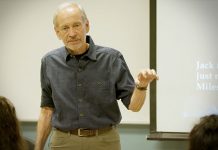