Film Courage: What makes for a good story?

Also, any of us who have gone to the movies and seen something really terrible like How did that get here? So that means there is an audience for everything. I don’t have to like it. Somebody else is at home looking at it thinking it’s the best thing they have ever seen. It’s subjective, it’s a subjective thing.

When I work with writers, I always tell them Don’t ask me if I like it. It doesn’t matter. It just really doesn’t. Also I am pretty hard to please so I almost never like anything. I don’t mean that I dislike it…(Watch the video interview on Youtube here). 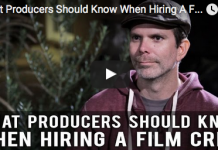