Film Courage: Scott, what made you want to be a writer?

Scott Myers, DePaul University Professor/Screenwriter/Creator Gointothestory.blcklst(dot)com: I grew up an Air Force brat. My father was a colonel in the Air Force so we moved around like every two or three years which meant there was a lot of time left for just being by yourself because it takes a while to make friends and what not. And living in usual places like Alabama and Minot, North Dakota lent itself to a lot of reading and I just started writing. I was writing short stories very early on. When I went to college I took some creative writing classes but I kind of let that slide. I was more interested in songwriting. I did that for many, many years. So that was my main focus.

Film Courage: Did you kind of write your own story for when you had to go to a new school, almost your own bio like “Hi, I’m Scott the new kid in class?”

Scott: Well the interesting thing (and this has actually paid off as a writer) is that I discovered early on the quickest and best way to make friends is to ask questions and just listen to them and they think you’re the best friend in the world…(Watch the video interview on Youtube here). 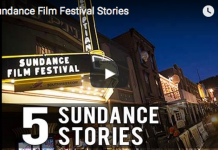