Film Courage: How active are you in pursuit for your next story on a daily basis?

Stanley M. Brooks, Producer/Writer/Director: I am always open to whatever the next story is going to be. Now that I’ve transitioned from being a producer to a writer/director I am much more picky and I am not open to just what will sell or what the marketplace needs. Now I am looking for just something that will really move me and that I will want to dive deeply into for a long period of time.

As a producer I could skim along the surface. I never had to dive in that deep. But as a writer or director or both it’s a deep dive and I have to be willing to commit to that and feel that can bring something to it and will enjoy those characters. I will say that one of the joys I’ve learned…(Watch the video interview on Youtube here).

How Does Someone Know They Are Meant To Be An Actor?... 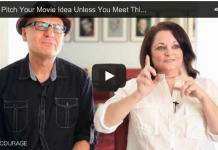