Film Courage: What has been the hardest part of filmmaking you’ve had to learn?

Aleem Hossain, filmmaker and AR/VR creator, assistant professor in media arts and culture at Occidental College: The hardest part has been to give up some of my moment-to-moment control and to realize that in doing that I actually gain artistic control. I came to filmmaking I think from the visual side. I thought that when I started filmmaking editing was my favorite part of the process where it’s just me and I can make every decision and for awhile it was. Now my favorite part is being on set with an amazing cinematographer, with amazing actors and being open to what that process yields.

It’s been a hard journey because it felt like I was giving up directorial vision at first because frankly I think I had a misunderstanding of what directorial vision is. I think I thought it was I’m going to micromanage every detail. What I’ve come to realize is that if I know very clearly what I want, what I want the audience to feel, what the point of the movie is, if I know that and can communicate it then I can actually delegate a surprising amount of work and I will literally get that thing I wanted because people who know the point and know the goal but then have space to do their own work and they produce excellent work. If you communicate well, it’s work entirely in sync with what you wanted.

Film Courage: Then there is the flip side of people who are too loose with everything…(Watch the video interview on Youtube here). 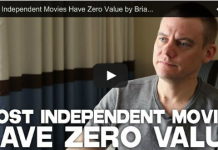