Film Courage: Once you felt like you had a green light to go ahead or access to the journalist, how did you set up the interviews? What was this process like?

Mark Landsman, Filmmaker of SCANDALOUS: The Untold Story of the National Enquirer: Tough…it was tough because some people said Yes and it was easy and we were able to make times and places and meet them.

Others led us along for quite awhile and really down to the wire (day of) kind of stuff. We had to be patient and let things play themselves out.

“I’m not making films to sedate people or make them super comfortable or serve up for them exactly what they need. There are other things out in the culture that are doing that. The purpose of a documentary film or really any film I don’t think is to be an opiate. I think it’s to be smelling salts.”

Tabloid reporters are very smart people and shrewd and want to know what you’re up to. So gaining people’s trust and saying Look, this is an opportunity for you have a space to tell it like it was for you rather than me imposing all my ideas about what it was on you or trying to frame you in a certain way. That took a minute to get people comfortable.

Then it was just about finding these locations. I had an incredible producer…(Watch the video interview on Youtube here). 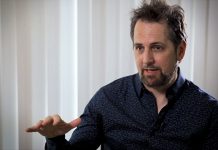