Film Courage: Tip #2 — “There are only two screenwriting rules?”

Travis: Yes, so I’ve got in my book here [365: A Year Of Screenwriting Tips] I’ve even got them labeled for you — Rule #1 is Write a script that looks like a script. Which I’ve already talked about, right? So if it looks like a novel, it’s not a script. It’s going in the garbage.

And #2 Write a script that feels like a movie. Preferably a good movie. If you’re obviously writing TV then it would be right to have it feel like a TV episode. If you are writing this big lengthy thing that feels like it should be a novel, you’re getting into the character’s mind (all this other stuff). It’s not a movie anymore. If you’re telling me something where it’s just us sitting here having a conversation, this is great for a YouTube video. I’m not going to watch a whole movie of me sitting here talking to you.

Even documentaries they are cutting away to other stuff, right? Other things are happening than just two people talking to each other.

It needs to look like a script and it needs to feel like a movie. Bonus points if it’s a good movie.

Film Courage: I like that. So don’t write War And Peace and submit it?

Travis: Yes, because if it’s a short…so I’ve been asked the question from people on Facebook and stuff where they’ve DM’d me and asked me How can I tell if it’s a short or a feature or a show? If you can tell the entire story in like 20 minutes or less and be done with it, it’s a short.

If it’s going to take at least a half an hour to tell it and you can have it done in like three hours and…(Watch the video interview on Youtube here). 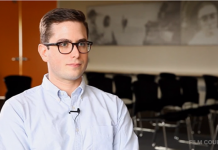