Film Courage: (Next viewer submitted question) from Michael Pithium “Definitely an awesome feature [film], but what drives you? Was it always a dream to be a filmmaker or was it something that fell into your lap one day?”

Justin Warren, Filmmaker: I think it’s somewhere in between those two things. I think I’m an odd case in the sense of when I was eight years old my grandfather gave me a VHS camera and the first movie I ever made was I made R2-D2 crawl across my kitchen table using stop-motion animation. It was the first movie I ever made when I was eight years old and I pretty much always played with a camera growing up because I was pretty lonely. I didn’t have a lot of friends so I would stay at home on the weekends and I would make…(Watch the video interview on Youtube here).

Born in Little Rock, Arkansas in 1987, Justin started making movies at the age of eight, including his own stop-motion animated Star Wars films. He graduated from Hendrix College in Conway, Arkansas with a B.A. in Theatre Arts and Dance, where he took the lead in numerous stage plays and won awards for his bold playwriting. In 2008, Justin and his family were featured in the 2008 CNN documentary “Black in America” with Soledad O’Brien which was broadcast globally. In 2014, Justin graduated from the prestigious USC School of Cinematic Arts with an M.F.A. in Film and Television Production. In addition to writing, directing, and co-editing his own films, Justin has also written, performed, arranged, and engineered three albums of original music. In 2018, his first comedy feature film, Then There Was Joe, made its World Premiere at Jeff Nichol’s (Mud, Midnight Special, Loving) Arkansas Cinema Society to sold out crowds. The film is currently screening around the country on the festival circuit and received a glowing review in the L.A. Times, which declared Justin as having a “bright future” in Hollywood. You can visit him online at Justinwarren.me. 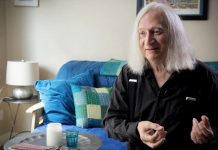 You Can’t Be An Artist And Care About What Other People...