Film Courage: Going back to before you applied to film school and what you thought was your vision of This is where I am going to be the next Cassavetes or whatever? And then time moves on and was it in line with that? Because people think it’s going to be this particular way and I’m going to be driving in a BMW down the 101.

Mark Sanderson, screenwriter/author: No, it never is. The romanticized image, no. It’s more of a craftsperson job. It’s a career but I look at it as a job and I’m blessed to have the job. It is my job and I’m blessed to have the job and I’m blessed to be working. I really like to work and I take as much work as I can and turn down things that I don’t like or can’t do. But it’s nice to be in a place where a producer calls you and says “Are you available?” I’ve also been in a place where you turn in a thing and you say “Am I good enough?” And you wait 6 months later and they say “I didn’t read it yet.” Which is the norm. So whatever level of the business you are working at to have any type of success (I’ve realized is an amazing thing).

“Out of film school I thought they were going to hand us our diploma and our three-picture deal (which is the joke).”

And many people can look down at (unless you’re the highest echelon at the A-list) and say well if you’re not that, I’m not impress by what you do. And so I say “Okay, I get it. You’ve never really struggled to get one thing made so you wouldn’t say that to someone who has been slogging away, the 10-year-overnight-success.” Like I said, it was 6 years out of film school (6 years) before I had my first professional job that I was later fired from quickly. And then 7 years for my spec to go through all the wrong people and the spec almost won the Nicholl Fellowship and all these adventures with that one spec. I wrote other ones already for me to finally end up with me sitting on the set during the filming going “Wow! This has been 7 years?” And every script and project has it’s own journey but sure out of film school I thought they were going to hand us our diploma and our three-picture deal (which is the joke) which is like “Of course I’ll be working.” Maybe as a PA which I never did. I knew how to make films. I didn’t want to spend 18 hours a day not writing. So I worked in restaurants as a waiter because I could always write, you know that’s me going through college.

But then you settle into a place where you are finally at whatever at level you are and have the players that you hire and the people that you know. But do I still want to get to higher levels, absolutely. But no one can take away my ability to write and create projects. So that’s thing, the next step would be for me to move into the producing aspect and create projects. Directing I’ve enjoyed, but I probably would have pursued it out of film school. I really like the fact that as a writer you can go anywhere.

Like I mentioned I was in Italy last year for 6 weeks and I was writing a screenplay. So if you have a laptop and Internet connection you can write anywhere. But a director needs a film crew. I have friends who can work two years on a movie directing it from beginning to end (it’s a big endeavor). I like the fact of being able to be mobile and work and maybe do more. This last year I had 6 movies written. So I don’t think I could direct 6 movies a year.

Film Courage: Yeah, it’s just so expensive. That’s great thing about the writing, even though sometimes they [the writer] is unappreciated, it’s the heartbeat of the movie and you can be on vacation while you are doing something else like writing.  But in terms of you growing up in Southern California, I wonder does this taint people in terms of the vision for the way a career looks like? Versus someone that is in another state?

Mark: Yeah, because it never seemed weird when my friend and I were making movies as a kid. It never seemed like such a weird thing because we were filmmakers because they were filming movies on our block outside. The biggest TV shows were right up the block, you know? Santa Monica used to film everything there. So we were like “Oh?” Now if we were living in a small city some where it might be so impressive or “I could never make a film because it’s such a big enormous dream.” But it was right outside our door so we were like “Huh?” In a good way or bad because you don’t know if you’re ever going to be able to do it and achieve and sustain that. So I think the wide-eyed dreamer is still inside and I needed that as a kid. But then you grow up and realize the realities of the business, who wants to spend millions of dollars and lose their money on their idea? It’s a business unfortunately, but if you can work in it as artists. And some are blessed to be an artiste, an auteur and others are people who get to work. And if I’m working in the film business, I’m a happy person.

Film Courage: Do you think you realized the amount of time spent alone at a computer or at a desk? I mean I realize you can be in a cafe writing and for a lot of people that does work. But do you think a lot of people realize being bound by this calendar? The calendar that says “Okay, I need this done by this date and I can’t deviate from that.”

Mark: Well in school or college you have a report or whatever do. There are do dates for everything but that made it seem more like a job. Which in the past it seemed more romanticized like I’ll sell my specs, I sell it and there will be some weird thing that happens where you won’t have to work so hard because you did the work, right? You sold spec with all the rewrites and the possibilities that can happen. Then when you start working in the business you start realizing all the possibilities that do happen and you’re like “Oh wow?” And it sort of knocks down the shimmer of this romanticized driving with the top down…I had a convertible one time…

Film Courage: [Laughs] I don’t know why that came into my head?

Mark: No, it was a 1965 Buick which was beautiful and I would drive up the coast. And you know driving on the lot and all this stuff you dream of. But then you still have to do the work and like I said I worked with a lot of actors back in the restaurant days who didn’t want to do the work. They loved you know [takes an imaginary drag off of a cigarette and exhales] “I’m an actor.” Brooding and this. “Are you taking classes?” “Well no? I went on this audition because I have a good look.” And I’m like “Oh, so you just don’t want to do the work? Or you think it’s just that easy?” So yeah, it’s changed, the perception I think of once you work at something where you have this outside perception that many people might have of “How amazing it is to be a writer!” Yeah, it is but as a writer take the Hollywood element out, it’s a grind. You’ve got to write. You’ve got to come up with stuff. 35 scripts, I’m like “How did I channel that many stories through this body into these things?” And then I go “There won’t be any others in the well, how could there be?” Well that’s your job as a writer, right? To come up with another story, to come up with another, right? I mean that’s the beautiful part of it to come back to the well and have it be full of stuff and that’s where your living comes into play, your experiences and living an authentic life where you are always observing and doing things because it’s your homework as a screenwriter to do that. Because you don’t want to go back to your well and have it be empty. That’s when your passion dries up and you’re like “I’ve got nothing to say. What am I doing?” And you shrink and you just disappear. And I think while you’re trying to pursue your career you have to live an interesting life and meet interesting people and have it all relate back to your screenwriting because it does. It’s your job to live an interesting, authentic life and I think that helps your work.

Question For The Viewers: Is your Hollywood career unfolding the way you imagined it would? 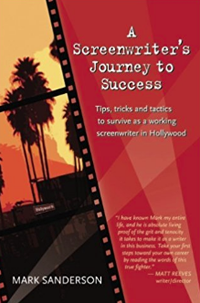 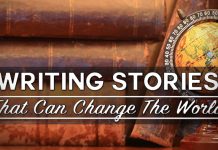