Today I want to talk to you about some DIY that we made over the years and how it’s helped us grow as filmmakers.

So what we’ve built here you can see is a dolly. It’s made out of plywood, skateboard wheels and aluminum angle iron.

A sheet of three-quarter-inch plywood cut in half and doubled. For weight it’s big enough for operator and camera with a tripod that is a full footprint and you put it down here on these PVC pipe and it will roll along.

So PVC pipe comes in 10-foot lengths. The dolly is about 4-feet long. So that means on one 10-foot length, we get about a 6-foot move.

We decided for SAY SOMETHING we wanted to buy a second set of pipes. So we can have 20-feet of PVC pipe which would give us a 16-foot move.

To connect them, we bought these smaller pieces of PVC and just taped with some painter’s tape around the center and that fits nice and snug into the PVC and you just connect them.

“It’s not about the gear, it’s about getting the shot you need as cheaply and efficiently as possible. Part of that has been building this gear when we haven’t had money to buy or rent anything else.”

So for this style we found plans for online. I’m sure you can Google DIY Dolly and find something similar.

The next two designs are things we came up with on our own.

So these are DIY light panels that we made for our feature film SOMETHING BETTER COMES ALONG.

It’s basically just a little piece of scrap two-by-four, some LED light bars that we bought at Home Depot. I think they were less than 10 bucks each and a little quarter 20 thread that we put into the bottom so you can put it on a light stand.

Basically, you turn each light on you can see that you’re not getting much light out of these. But when you’re on location and it’s dark and you don’t have any access to power, these really helped us out in those situations.

There are obviously some problems with them where each individual light bar has a different color temperature.

To be honest, these days light panels you can get for pretty cheap on Amazon. They work really well just as well as expensive ones. So this is the kind of thing you wouldn’t really need anymore. But if you’re really strapped, it can really help out.

So this is our latest creation, it’s a car mount made mostly of scrap wood. The only thing we bought when we made this was these threaded rods, nuts and bolts and these little paint rollers that we use as pads so we don’t scratch the car.

So what you do is right here is we have a two-by-six and a piece of ( believe) half-inch plywood. You can put your tripod head right in there. You screw it in, tripod head here, camera on top.

Now I’d recommend if you do something like this, you want to ratchet strap down, tie it off, just anything you can do to make sure your camera is not falling off.

We’ve had pretty good success with this. We’ve used it on the sizzle reel for THE LAST WHITE MAN. You can see the shots of Carl driving his car. We’re all done with this and it looks really good. You wouldn’t know the difference between this and a professional hosting rig.

Throughout the years, part of our growth as filmmakers has evolved using our own ingenuity to solve problems. So it’s not about the gear, it’s about getting the shot you need as cheaply and efficiently as possible and part of that has been building this gear when we haven’t had money to buy or rent anything else.

But it’s also taught us to think outside the box and to do the best we can with whatever we have.

And I think that will help us going forward on THE LAST WHITE MAN [now on Kickstarter] and any other projects we have. 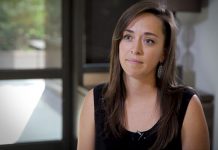 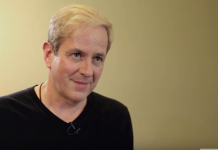 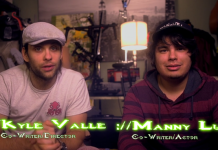