Film Courage: In all of your classes (growing up) was there one instructor that said something to you which really changed your way of thinking about writing? And do you remember that moment and what it was? Where it really popped, it made sense? It could be something very basic or more elaborate?

Film Courage: Whether you were sitting in class, whether it was notes they gave you?

Eric Edson: One of the things about being at the MFA program in playwriting (this was, so it was fairly early on for me at UCLA), they…as all universities they are very big on employing, inviting in as lecturers and it’s part-time people known and greatly experienced in the industries. And they would come in and teach a course, for instance a graduate course.

There was a world-famous playwright in particular who came in and did this course. A wonderful, wonderful man and a major talent and I took the course and it wasn’t the ultimate word of wisdom, that’s not what I took away. What I took away from that course is every writer and every life is different and in a way sometimes that we do not even want to hear, it is truly up to us.

Writers have in their core hopefully the ability you know we’ve been alone all of our lives and our thoughts to stand alone because hearing about other people’s journeys in a personal way, these people just weren’t (I mean this particular individual too was a wonderful soul).

But basically what he did was he told old war stories all semester long. And what we were writing, we wrote on our own, it was up to us. In the entire time that I was in UCLA, nobody made any serious attempt to teach me the toolkit or approach or structure of writing full-length plays. It was all touchy-feely and all up to you. And for awhile there I was a bit upset about that, a bit ticked about that. It did cost money and all that stuff. But yes, I learned what they didn’t perhaps intend to teach which is one person’s journey is going to be different from yours.

Now this is kind of the opposite from what you were asking for, you know this ultimate gem or jewel of wisdom. But I think it is a jewel of wisdom that these are good, brilliant, accomplished artists who are most sincere in their ability to share how they’ve done it and what they did, be able to share that with these up-and-coming writers before them in the grant program. But I came away feeling they didn’t have a whole lot to share and that’s okay, I get that. We will make our own path.

Film Courage: Do you think because they were so busy doing that they had a hard time articulating how they did it or no?

Eric Edson: I don’t know. I think most of them were instinctive writers, they didn’t codify it. And that’s why when I later came to teach screenplays, I was kind of obsessed with this has to be…this is teachable. These are smart people. They can learn if we can make this teachable, it can be taught. I mean there are certain levels at which skill, talent (it helps to have talent).

But we all know (I certainly think), I hope most people understand that it’s not necessarily the most talented writers who end up getting their scripts sold and even made. That’s not how it works. They come up with ideas for stories. Hollywood buys stories, not particular scripts by particular writers.

Film Courage: And they are stories that take people on a specific emotional journey knowing most likely that they are going to come out feeling good at the end.

Film Courage: Not yet.

Film Courage: Yeah…but there are still the gems. I felt like after 9 things changed but that’s a whole other topic.

Question for the Viewers: What writing advice has stayed

with you for years?

Why A Screenplay Needs Your Personal Stories – Pedro Correa 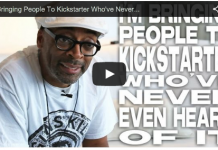