Film Courage: [What are] several ways writers fail to ask for help. Some people suffer from Super Hero Syndrome (they can be male or female). They don’t want to ask anyone for help. They want to do it themselves…”No, I’ve got this. I don’t need help.” I know you’ve said that it’s crucial for writers to reach out. How so?

Jen Grisanti: That to me is the key between working and not working. Like, you could write the greatest script in the world….(more from Jen in this video on Youtube here). 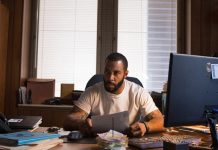