.
I first met Tom Wilton in a basement café in Glasgow, Scotland, back in 2008, when my debut short film, Nightclub Story, screened at the inaugural edition of his Bootleg Film Festival, a travelling film festival ran by filmmakers, for filmmakers. We’ve remained close friends and colleagues ever since, even bringing the Bootleg Festival to Toronto in 2012.

A word about Tom – He is the kind of filmmaker that just does it, pure and simple.  He writes the script on a Thursday and goes to camera on Friday.  He flies by the seat of his pants and pays no attention to budgets (or lack thereof) and what he would call the unnecessary artifice of filmmaking.  He keeps it tight and simple, and over the years, he has more than matched his ambitions with product.  Growing ever more capable as a one-man production studio as he grows as an artist. 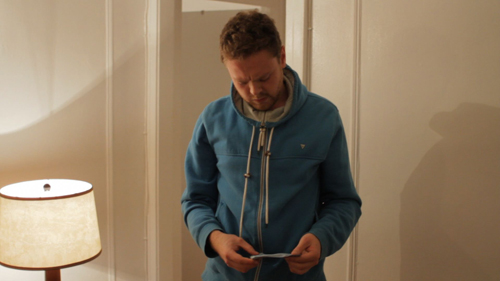 “Full Disclosure:  I had become envious and bitter.  My motivation had been replaced by excuses and rationalizations.  I had managed to convince myself that I needed, and spent so much time waiting for, permission from someone at the “big boy table” to make a film. I had forgotten a basic, golden rule  — you don’t need anyone’s permission to make films.”

.
You can read all about Tom and his work here, and be sure to check out his latest venture, Cinema Zero, which grew organically out of the Bootleg Film Festival.

We decided to wrap up the Bootleg Festival with a final installment in New York City in March 2013.  Tom had just moved there from the UK, and simply put, we wanted to focus the energy we’d been putting into the festival into our own endeavors.

I had got myself into quite a rut by then.  Three shorts, spanning 2008-2011, a web series in 2013, all successful on the festival circuit, but that elusive debut feature project was getting further and further away, and Tom noticed. 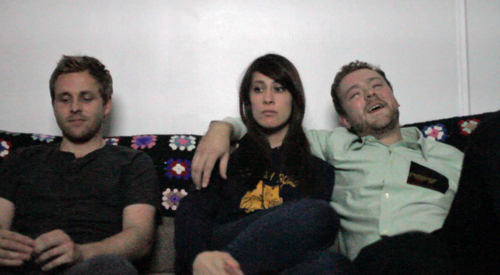 .
Full Disclosure:  I had become envious and bitter.  My motivation had been replaced by excuses and rationalizations.  I had managed to convince myself that I needed, and spent so much time waiting for, permission from someone at the “big boy table” to make a film. I had forgotten a basic, golden rule  — you don’t need anyone’s permission to make films.  You don’t need a million dollars.  Just do it.  I had forgotten what makes Tom such a force of nature.

On the final day of Bootleg NYC, in an intervention of sorts, Tom and Neil Rolland, a gifted Scottish Filmmaker also in the Bootleg Brain-Trust, all but demanded I get down to brass tacks and make a feature already.  In Neil’s words, they missed the “old Jeff”, full of creativity and ambition, and echoed my own suspicions that years of sitting on the fence had turned me into a shadow of my former self.  Tom’s suggestion was that I return to New York as soon as possible and together, we’d make a feature like he makes features – fast and dirty. 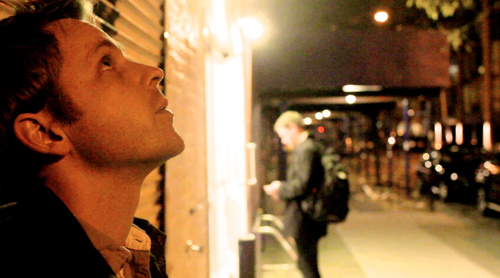 “Making the film was an exhilarating blast of every possible emotion, as it should be. I slept on couches, I ate way too much cheap pizza, I both took and delivered my share of shit sandwiches, and I carried way too many bags on the subway in rush hour to not be a target for pickpockets, including a very pink clamshell suitcase.  Yeah, I made New York City my bitch, and it was FANTASTIC.”

On the drive back to Toronto, my sister and I hashed out a basic story.  About three weeks later to the day, I was back in NYC, and over dinner, Tom and I beat out this story into a loose treatment.  Happy with the result, Tom went to work on a script proper while we explored casting.

To say this process went as smooth as silk is to do it an injustice.  It was pure magic.  Very quickly we found the perfect cast, all hungry, intensely creative people that identified with the material and gelled perfectly with our micro-budget plan of attack.  I was equally impressed and taken aback by how quickly it was coming together without any compromise.  I was gearing up to make the film I wanted with the people I wanted, too.

Within a week of arriving, I was rolling camera on my debut feature. 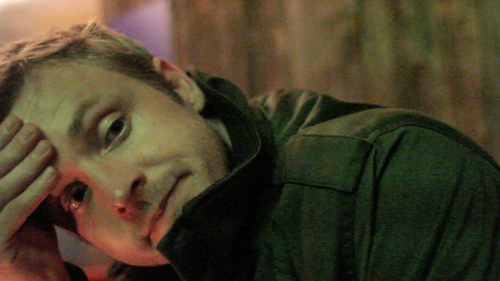 .
This became Elsewhere, NY. Shot over 17 days in New York with a cast of four and a crew of two, it’s a tense relationship drama centered on the love triangle of Jen, Todd, and Ethan; flawed and passionate New Yorkers coming to terms with their city, their hopes and dreams, and each other.

Making the film was an exhilarating blast of every possible emotion, as it should be. I slept on couches, I ate way too much cheap pizza, I both took and delivered my share of shit sandwiches, and I carried way too many bags on the subway in rush hour to not be a target for pickpockets, including a very pink clamshell suitcase.  Yeah, I made New York City my bitch, and it was FANTASTIC.

It certainly wasn’t easy.  But it was never supposed to be.  It most certainly is the best decision I’ve ever made, and the best thing I’ve ever done.

In the end, I made the exact film I wanted to make, and as it begins what I hope is a glorious festival run with a World Premiere at the prestigious Whistler Film Festival, I feel like shouting it’s praises from every rooftop. 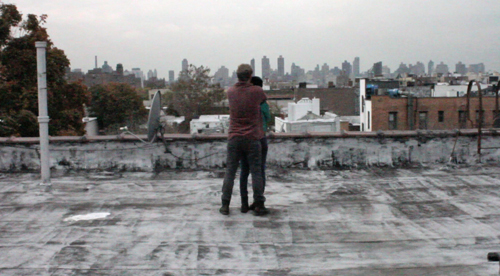 .
A film, even a micro-budget one, is a team effort, and I had a fantastic team.

To my actors, Gillian Leigh Visco, Andrew Ruth, Andrew Leland Rogers, and Fiona Graham, I owe you a singular debt.  You trusted me to do something very ambitious with no time and no money.  We succeeded not because of me, but because of each of you, and that sacred trust.

To my composers, Jason Thomson and Simon Poole, and all the bands that graciously allowed us to use your music, you rolled with a workflow from hell, countless changes after the fact, and so much more noise, if you’ll pardon the pun.  Sasha Abramov, thanks again for doing what you do so well – delivering amazing graphics and VFX quicker than it takes me to type out my thanks!

To Elma Bello, who became much more than a Sound Designer.  You became a trusted lieutenant.  Your belief in the film held the whole ship together more than a few times, and your tireless devotion to making it great is beyond appreciated.

To Allon Schemool, Nicole DeWalt, and “Fireman” Sam, who opened their doors, and their lives, to an old friend from Toronto with no other place to go, without you, there would be no film to speak of.  I am forever in your debt. 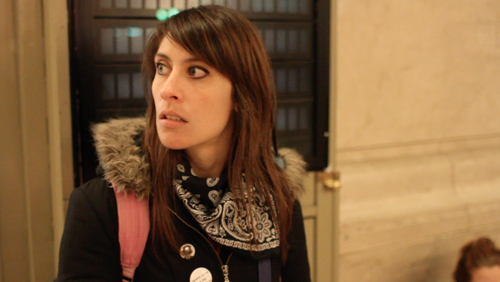 .
And, of course, to Tom Wilton, who showed me a kindness and willingness to service my dreams that I will cherish forever.

To say that I am a different person after completing Elsewhere, NY is a gross understatement.  After years of sitting on a fence, I’ve gone and climbed the mountaintop, and it feels damn good standing at the summit looking down. 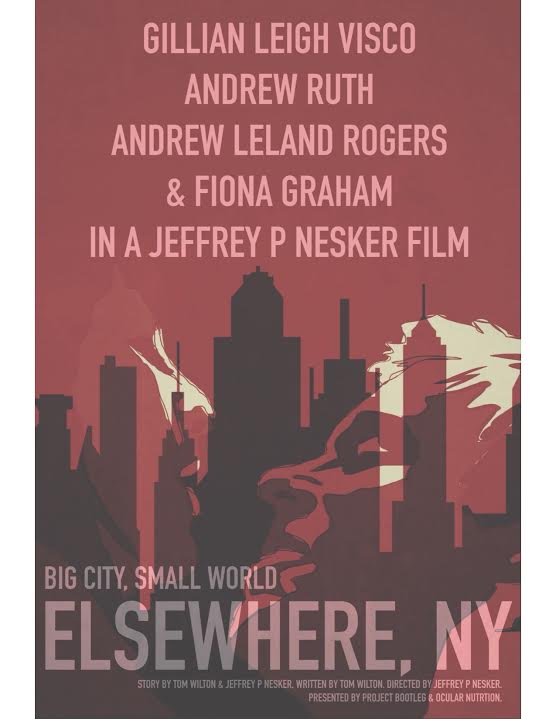 The future has never looked so bright.  I hope I can share one thing with all you aspiring filmmakers out there.  JUST. DO. IT.  There are really no excuses.  Besides, sitting on a fence just isn’t good for your back, or your soul.

Jeffrey P. Nesker holds a B.F.A. from York University’s Department of Film & Video.   His three “proper” short films, under his production banner of Ocular Nutrition, Nightclub Story (2008), Apocalypse Story (2010) and I’m Right Behind You (2010), a collaboration with The Chimera Project for Canadian arts channel Bravo.  I have done very well on the festival circuit and won several major awards. In 2012 he brought the traveling Bootleg Film Festival across the pond from the United Kingdom to Toronto. In 2013, Mr. Nesker directed the superhero web-series The Undrawn, which was awarded a Bell Media Fellowship at the 2013 Banff Worldmedia Festival.  2014 will see the release of his debut feature film, Elsewhere, NY.  Mr. Nesker is developing several other properties, including a follow-up feature project he hopes to shoot this year.  He stays busy creating music videos and continues to be an accomplished On-Set Script Supervisor and Picture Editor. For more info on Jeffrey, please visit Ocularnutrition.ca. 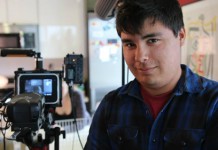 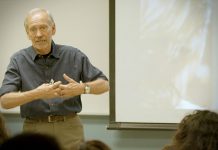