As a storyteller I am obsessed with loneliness, and the things we all do to make ourselves feel less alone, even if only for an hour, or minutes at a time. This gave birth to my film YOU ARE ALONE in 2005. And since the making of that film, I’ve been talking about doing an ALONE trilogy.

Or course three rock documentaries with crazy long titles (COLOR ME OBSESSED, A FILM ABOUT THE REPLACEMENTS; EVERY EVERYTHING: THE MUSIC, LIFE & TIMES OF GRANT HART; and WHAT DID YOU EXPECT? THE ARCHERS OF LOAF LIVE AT CAT’S CRADLE) got in the way of that progress.  But that was a good thing.

BROKEN SIDE OF TIME‘s world premiered at VisionFest in NYC on Friday, June 28th, 2013

My new film BROKEN SIDE OF TIME is, finally, the second part of that trilogy. A feature-length road movie that pulls back the curtain on our own personal vices and secrets, the lies we tell ourselves every day to get by.  And how sometimes what makes us feel most alive, is really killing us.

The idea came to life from the hundreds of stories I’ve heard from friends on both sides of the camera who’ve used the internet modeling sites One Model Place and Model Mayhem. Some of the stories are crazy, some are funny, many dangerous, and a number are pretty damn hot. But the one thing they all had in common was how captivating they were.

I felt it was a world we hadn’t seen before in film, despite there being over a million women with portfolios on line.  It was a place where any girl can call herself a model, and any guy with a camera can be a photographer. And yes, there are some truly talented people on these sites, but they are hardly in the majority any more.
After making my film FRIENDS (WITH BENEFITS)  (that’s the original friends with benefits movie, thank you very much) I knew that actress Lynn Mancinelli was someone I wanted to work with again. So we started talking about this project. I had just completed COLOR ME OBSESSED, and I was in love with the notion of not having a script and finding the story in the editing room.
This was how I pitched it to Lynn:

“You’re a famous internet model. You’ve been doing it for over a decade, and have made a career out of it. But now you’re competing with 18-year-olds. And the lifestyle — the drinking, the random hookups, and yes, the drugs — is starting to take its toll — What makes you feel most alive is killing you. You decide it’s time to go home, mend all the burned bridges with your family, and figure out the rest of your life. But you know things have to change before showing up on your mother’s doorstep. So you take the long way home, an extended road trip shooting with as many photographers as possible, raking in as much cash as you’ll need to start over, and indulging in all your favorite vices one last time along the way…hopefully breaking their hold over you.”

I told Lynn there would be no script. She’d shoot with real photographers that we’d find on the modeling sites. We’d be using a very small crew, sometimes only me. That yes, I would be director/cinematographer/editor. I would shoot the film as I used to shoot stills when I was a photographer on those same sites. I told her that she would have to trust me.  And trust me she did, turning in a raw and beautiful performance as the soon-to-retire model Dolce.

There were many scenes shot with me as the entire crew, doing lighting, running camera and sound, and directing.  It was my first time using a DSLR.  A Nikon D7000 with a set of old manual prime lenses.  I fell in love with the camera the first day when I shot a scene lit entirely by a Zippo lighter.  It truly blew my mind that it could be done, and that it looked so damn good.  Often times we had a sound person with us, who would also handle the AD/Production Manager role.  The largest crew we ever had was four.  It’s really all any film needs.  And as always on my sets, we ate well and had the best coffee in the world.

This is how we describe the fiished film: “Over a million women have modeling portfolios online. BROKEN SIDE OF TIME is the story of Dolce, one of the models who’ve made a career of it. But now 30, and tired of competing with 18-year-olds, Dolce realizes what makes her feel most alive is also killing her. Before starting a new career behind the camera, she embarks on a long road trip home, shooting with her favorite photographers one last time, and shedding her lifestyle-acquired vices along the way.

Combing real photoshoots shot cinéma vérité-style with a narrative based on some very real-life adventures in front of the lens, BROKEN SIDE OF TIME is a dark, sexual glimpse into a world never before captured in a film. A world where any woman can play the role of a model, and any man can be a photographer, and where even the best of them must consider whether the fame and money is worth the cost.”

BROKEN SIDE OF TIME runs 126 minutes.  It’s final budget, just $15,000.  (The haunting Ry Cooder-esque score from Dean Falcone was worth ten times that alone.)  It features an original theme song by Matthew Ryan.  And it is making it’s world premiere at VisionFest in NYC on Friday, June 28th at the Tribeca Cinema.  Screening time 9:30 PM.  In a time when Hollywood has hijacked the word “indie” with supposedly low budget films costing $20 million, do your movie-loving self a favor and revisit what real independent cinema means, and check out BROKEN SIDE OF TIME.

Gorman Bechard is the author of six novels, THE SECOND GREATEST STORY EVER TOLD, UNWOUND (under the pseudonym Jonathan Baine), NINTH SQUARE, THE HAZMAT DIARY, GOOD NEIGHBORS, and BALLS

He directed/wrote the indie features FRIENDS (WITH BENEFITS) (2009) and YOU ARE ALONE (2006), the horror comedy cult-classic PSYCHOS IN LOVE (1986), as well as the award winning shorts OBJECTS IN THE MIRROR ARE FURTHER THAN THEY APPEAR (2003) and THE PRETTY GIRL (2000).

His latest features are the critically acclaimed COLOR ME OBSESSED, A FILM ABOUT THE REPLACEMENTS, which screened in festivals, rock clubs, indie cinemas throughout the world, and even the Rock & Roll Hall of Fame, and WHAT DID YOU EXPECT? THE ARCHERS OF LOAF LIVE AT CAT’S CRADLE, which had its World Premiere at NXNE in June. Both films were released in deluxe DVD editions on November 20th, 2012

Bechard newest feature BROKEN SIDE OF TIME, a dark thriller set in the world of internet modeling, will have its world premiere in June 2013. It is part two of his planned ALONE trilogy.

He is also beginning the festival submission process for his third rock doc, EVERY EVERYTHING: THE MUSIC, LIFE & TIMES OF GRANT HART, a documentary on Hüsker Dü’s infamous drummer/singer/songwriter.

And lastly, the prolific Bechard is shooting two new films, both documentaries. The first, A DOG NAMED GUCCI, takes a look at domestic animal abuse in the U.S., told though the story of one man and one dog who changed Alabama’s laws forever. The other, PIZZA, A LOVE STORY, tells the history of the three greatest pizza places in the world: Sally’s, Pepe’s, & Modern, all in his hometown of New Haven, CT.

Gorman’s complete filmography can be found at WhatWereWeThinkingFilms.com.

His filmmaking blog is GuyWithTypewriter.com. 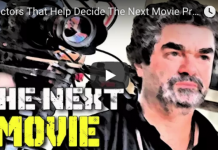