The internet is awash with advice on how to make movies. There are books for scriptwriting, masterclasses for adaptations. You can study film making at any number of colleges and universities and as if that wasn’t enough there are websites galore where you can have your work edited, critiqued and analyzed, forums where you can find collaborators in your great dream…it goes on.

The increasing availability of digital technology; be it camera kit or editing software means that this is a golden age for nano-budget film. It’s never been easier to start making a movie.

For the last three years I’ve worked on the movie Electric Man. An indie comedy about comic books and superheroes and geekery that I wrote and helped to produce. That last one might be overstating it a little. Let’s just say that I didn’t get in the way too much when the real film makers were going about their work.

How did it turn out? Fairly well as it happens. We made the movie on a budget that wouldn’t cover the hairspray costs on Braveheart or even a couple of Iron Man’s suits. FilmBuff took it global on iTunes and Xbox and PS3 and all those things this week. So…brilliant. Isn’t that what we work for after all?

Well, yes and no. Not necessarily.

Make no mistake I’m not complaining but the reality of the indie film maker is that the making of a film doesn’t end at the wrap party, nor does it end at the premiere, or even the DVD launch. Not if you want anyone to see it.

But that quote makes it seem as if there is some sort of parity between the two phases: that they are of equal length. And they ain’t. Not by a long shot.

There’s the theatrical release (if you are lucky enough to get one), then there’s DVD and Digital platforms – if you are luckier still there are TV sales to follow that. A movie takes more work after it is made than it ever took to make in the first place.

Let me say it again – I’m not complaining. Electric Man got a great deal of interest. We got picked for San Diego Comic Con, went to LA, spoke with agents. The story revolves around a valuable comic book so now we are talking to European publishers about a graphic novel. It’s a comedy, so now we are in talks about a sit-com based on the characters.

There’s just one question I have trouble answering and it’s this;
‘If you knew then what you know now…?’

Would I still do it?

Like most artistic type folk I have a lot of friends who aren’t artistic at all. They are lawyers and businesswomen and firemen and so on. In the main they are all far more successful than I am which is to say that they are fully functioning adults. Grown up people doing grown up things. Sure, sometimes they are happy, sometimes sad, but for the most part they seem stable and do things I don’t understand – like go on vacation. I envy them.

In the meantime I live in a world of constant struggle against the ‘noise’ that is the internet. Trying to come up with new ways to let the world know about the movie and the ever expanding universe that is Electric Man. Blog posts, press releases, writing comic pages, online interviews, contacting media outlets and websites… it’s work and like all work it has its ups and downs. There are good reviews, bad reviews and (worst of all) complete silence. You work for the occasional comment on the facebook page from someone who really enjoyed the movie.

And that’s fine – I’ve done a lot worse, buy me a beer some time and I’ll tell you the story of when the director and I used to wade waist deep in maggots for a living.

But here’s the thing… it’s not writing.

First and foremost that’s what I love. Creating stories and living in my little dream world with a lot of made up people. If you are intent on making a movie there is lots of advice out there on how to get started and what to do when you have started. There are experts who will give you sound advice on how much of a marketing budget to build in before you even start. These gems are all valid but I would like to add one of my own.

The film industry is brutal and you will throw a lot of energy out into the world with no guarantee of getting anything back in return. Worse, you will be doing work that you never envisaged doing and that you might not regard as fun. Tramping around festivals big and small, never knowing if the audience is going to be three or three hundred,  takes effort – be ready for it.

And now I think I can answer my question. Knowing what I know now, would I still do it?

Yep. No question. In a heartbeat.

You’ll find out as you go through the process but remember all of those people I spoke about? All of those stable grown-ups who go on vacation and don’t have a panic attack when their car needs a new tire? They’re the reason.

When you talk to them and (like polite normal people) they ask you what you are up to…you get to say ‘Making a movie’. Watch their eyes as you say it. There’ll be a little sparkle there and instead of a somewhat tired ‘Uh huh’ they won’t just be waiting for their turn to speak. Instead they’ll lean a little closer and say ‘Really?’

Because what you are doing isn’t normal. It’s something only a few dare to try.

Budget for that as well.

When a rare first issue of the Electric Man comic book mysteriously appears in Jazz and Wolf’s comic book shop, it seems their financial problems are solved. However, the pricey comic is sought by a number of people who’ll stop at nothing to get it for themselves, including the strange and alluring Lauren McCall, comic-nerd Edison Bolt and Lauren’s Uncle Jimmy, a violent thug. This inventive and hilarious comedy whodunit blends the mystery of The Maltese Falcon with the geekiness of Clerks.

Scott Mackay is the co-writer and Associate Producer of Electric Man.

Electric Man is available on iTunes, Xbox, PS3 and Blinkbox and on DVD from Amazon. 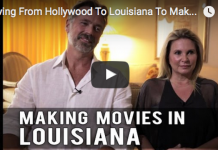