Film Courage: What the biggest success you feel you both have had so far and where were you in your life when it happened?

Marc Zicree:  Okay…well for me the biggest success I’ve ever had is meeting you, you know?  That made everything.  Everything that is good has come into my life because of that.

Marc Zicree: So that is the high point, you know? I mean, I’ve been very, very lucky because I met Elaine when I was…I think I had just turned 20. And so that was perfection. That was great because (again) when she met me I was just a little college student, there was no telling if I would accomplish anything and she had faith in me. So when I met her, I already knew she was wonderful. But she was taking a big risk on me and it worked out.  But I’ve been very lucky because think of all the people who as kids wanted to be writers or directors or producers.

They watch TV shows and they say “Gosh, I’d like to be part of that world. I want to be on the other side of that glass of the TV screen.”  And I got to do that.  I got to be that. I mean, my heroes were Rod Serling and Ray Bradbury because they were doing TV and books and movies. And I got to do all of that and so I am very, very lucky.

But Elaine had faith in me. And it’s funny because I was going to say I was uninformed. When she met me, I wasn’t able to do any of the things I can now.  I mean…but she had already directed Off-Broadway, she’d already been an actress, she’d had adventures and she had already proven her value.

Elaine Zicree: I think for both of us our biggest successes are whatever we’re involved in at the moment. We’re not looking back. We’re sort of drunk on the moment, the enthusiasm of the moment.

Marc Zicree: We don’t rest on our laurels. Right now is the exciting time. I mean to have my own studio, to walk into a building filled with spaceship sets…I mentioned that when I was 10, I went to the Star Trek set and when I stepped onto that stage with our spaceships, that’s the exact same feeling, it’s the same thrill. I’m 10 years-old again. And to be able to create something it’s like, every day is like Christmas. It’s just like basically my gosh, wonderful actors, wonderful people to work with, and to be able to write, direct, and produce with Elaine is such a thrill because she brings the meaning, she makes sure that what I am doing is meaningful and is working. And when we are done with this we will go back with our editor and sit down and continue working. And that’s just thrilling. And so, we are very lucky to be where we are and do what we do.

Film Courage:  What would you say to someone who might be listening to this who feels that maybe they hit their peak (however many years ago) and they feel there is no way up for them, for whatever reason?

Elaine Zicree: I would say that this has nothing to do with their craft. I think it has to do with feeling stuck in their life and to take a walk around the block, talk to people, volunteer, bring yourself back to your work. Something has happened. There has been a disconnect and that I doubt very much it has to do with their craft. It has to do with they have lost something inside, which can easily be regained if you don’t tell yourself a story.  You know, it’s the stories that destroy us. And to just say get re-enthused about your life. And it’s not in the past.  All of those years, even those years of misery there’s…you know we were talking to a large group of writers in a seminar. And two of the writers in the far front corner of this large room, they raised their hand and said “Well we’re from Denmark and we’d love to work here but we are very different, we’re a different culture. We really feel like we have nothing to say, we feel like such outsiders.” And I said “Well why don’t you just turn around and look at everybody else in the audience.” And they did. And I said “Okay, everybody else in the audience, who here feels like an outsider?” And every hand in the room went up. And I said “I think you’ve got something to write about.”

What’s important that a lot of people don’t realize is that “Oh, I feel so alone.” And you just say “Well, everyone tends to feel secretly very alone.”  So you understand that even in your loneliness, you’re not alone. So have the courage and share it. And that makes you and everybody else feel less so.

I think those feelings to say “I’m feeling it but I know it’s bogus and I will push through.”

Marc Zicree: I would also say in that regard is that every day that you wake up is another beginning. And the past in a way is an illusion. It’s sort of like it’s gone, you can’t reclaim it.

Elaine Zicree: In one of my scripts that I’m in the middle of polishing, there’s a place of second chances. And somebody says they don’t believe in a place where you can get second chances and they say “Well if somebody found out that there’s a place of second chances then this place would be flooded.” And the fellow he is talking to laughs and says “No…no…no, you’re thinking of the town down the way of damn good excuses!” And I think that when sometimes people feel defeated part of them is looking for the good excuse and not really for the second chance because that we can make endlessly.

Marc Zicree:  Well one thing I will say in conclusion in that regard, I would urge anyone who has a dream to pursue it and to not be deterred and to take a chance, you know? And to really go for it. And one day I came home and there was a message on my answering machine and it was Ray Bradbury and he’d come across something I’d written and he loved it. And he invited me to his house. That was (of course) a thrill of a life time. And I went to his house and we hit it off and we became great friends. And the thing that amazed me about Ray was that I knew him in his 80’s and into his 90’s, he died at 91. And through that whole time, I met him after he’d had a stroke and his schedule as a writer had been to get up, 5 days a week, write for three hours, then have lunch, take a nap, do his business (the business of his career in the afternoon) and then evenings and weekends were for his family. And he did that for 70 years. And when I knew him, he’d had a stroke and his mind was fine but he couldn’t type anymore and his handwriting was even very difficult. So what he would do to continue writing was he would wake up in the morning holding the words in his head, he would then call his daughter in Arizona and dictate the words to her, she would type them and then fax them to him and he would make hand corrections on the typed script. That was how he wrote. And he was writing two new books a year through his 80’s and into his 90’s. And he was made of iron. This was the kind of person that I wanted to be my inspiration and my mentor because I saw how determined he was. Nothing was going to stop him and that was wonderful to see and certainly something I want to emulate.

I would urge everyone to take that to heart and not be deterred.

Question for the Viewers: What’s the reason you are not going after your dream? 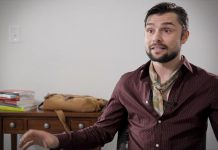