Eric Edson:  If you write badly, for instance…I’m trying to think of a good example.  How about when I wrote my book, when I had trimmed it down, nice and tight and I thought I really had it ready to go.  I had 120,000 or 130,000 words in the manuscript.  And I called them up and said “Okay, I’m ready to go.  I’ve done my cutting and…here it is!  130,000 words” and he laughed (the publisher laughed) and said “No Eric.  We don’t publish anything over 70,000 words” and it was like this bolt of horror that hit me.  And I said “Wait a minute! Are you actually telling me that I have to cut my book in half?”  And he said “Yeah…actually…I’m afraid I am.”

So for 3 or 4 days I was just practically in a coma but…any writer…you’re appalled by the way and what they make you do to your babies.   And then I got some help.  I had somebody else, a dear, dear friend who was good with editing take a look at it.  And I seriously cut into it one more time for editing.  I got it down to 82,000 words.  Not quite their 70,000.  But I cut out by 40-45% of the book that I thought was absolutely necessary, it was gone and the book was better for it.  It was such a better book.  It was clearer and it was cleaner.  And there were so many swamps removed from it.  It was an interesting experience.  But I did not realize then…you have to re-objectify and I didn’t realize yet how much work there was yet to be done.

So writing is word choices and a process of re-objectification that is something critical, too.  Which means writers never write alone.  Never.  But we spend a lot of time alone in the writing process.  Once we have something, then we have to (and this is important, and this is important to new writers everywhere), you have to have a circle of new people whose opinion of material you trust.  It’s one of the things that happens in our program.  These people make friends for life because then they rely on each other’s judgment because everybody knows everybody’s opinion grows to become quite sophisticated about the material and you can always call up one of your buddies and say “You want to do a script swap?” You read mine.  I read yours.  And what you get back (frequently) if not what you want to hear.  We’re all children.  We all want to say “Oh!  That is the greatest thing.  Isn’t that great!”  And that is never what you hear so you’re always eternally disappointed. So you hear objective, good criticism of what you’ve got and I always tell them 48 hours.  Don’t do anything for 48 hours.  Suffer.  Fine.  Stay in bed.  Whatever you need in response to what you’ve heard about your material and then sit down and read it again (cover-to-cover). And it will be revealed to you through someone else’s point of view what you really have.  And all of the sudden it’s time to start editing again and rewriting again you will get it.  And what has happened there is that the cycle of subjective work to re-objectification. Because the more you work on something over time, the more you are in it.  You are drawn into it and it becomes within you and it is about you and you think you’re doing something great and then you take it out and you get a slap in the face or two, it clears your eyes, it clears your vision very, very well.  You become re-objectified and you approach the material again with clean eyes for another go-around.  And in my experience (if you really want good material) and I’m assuming we all do, there are some who just want pats on the head and all that kind of stuff.  But if you really want the material to be good, you have to go through that cycle, subjectivity/re-objectification,  subjectivity/re-objectification, four or five, maybe six times.  Then…then…each time, it gets better…and it gets a little better…and a little better.  And you don’t want to send anything out.  It’s one of the biggest mistakes people make, sending out material before it’s finished.

Film Courage:  So if you’re giving writers the permission to write badly and you’re doing these exercises and that is one of the first things you write on the board (when you start class), what permission are you giving them with re-writes?  And how open are they to re-writing?

Eric Edson:  Most of them get it.  I mean it’s a cliché, but clichés are clichés because they’re true that writing is re-writing.  And the only real way to teach writing is through editing.  That’s why I spend a great deal of time on scripts and sample editing and scratching out stuff and throwing out scenes. And telling people “You don’t need this” and “This is good.  Expand it here” and all that kind of stuff because it’s stuff that people truly need to hear.  That is what you get in a concentrated two-year, four semester program.  You get a heck of a lot of practice in a very short period of time, surrounded by very knowledgeable people who can guide you.  Is there wear and tear on the nervous system?  You bet.  That’s kind of built in and guaranteed.  But so far, I’ve never heard anyone say they regret it or anybody complain about it when they come out the other end.

The other thing I write on the board a few weeks later is “There is no such thing as a bad screenplay, only an unfinished one.”  And this is something I truly believe just as strongly as I believe about you’ve got to write badly with pride or you’re never going to write anything.  You have to allow yourself to do that.  But I think any idea for a screenplay that is conflict-based (this is the essential), it has to be conflict based.  But any idea for a screenplay that is conflict-based can be made to work.  It can.  And bad screenplays (if they contain some conflict), they can all be made to work, it’s just that they’re sent out before they’re finished.  And when you send something out before it’s really finished, you really only get one good shot at it and then you kind of burn it up.  And a lot of good ideas have gone to the idea cemetery because of making that move.

Question for the Viewers:  On average, how many times do you rewrite a screenplay? 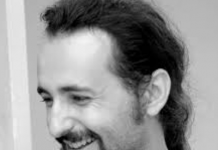