Film Courage: Travis when did you move to Los Angeles and why?

Travis Seppala, Screenwriter/Author:  August of 2016. I’ve only been out here a couple of years because I wanted to get into television writing. You can write features [film] anywhere but if you want to do TV you’ve got to get here where the [writers’] rooms are. They might film in other places, like Vancouver is a big place to film because of all the film incentives that they have like tax breaks and stuff like that but the rooms are still all here in Los Angeles. There’s a couple in New York but mostly out here.

Since I wanted to do TV writing I had to be where the rooms are and moved out here to do that.

Film Courage: What were you doing prior to 2016? What was life like for Travis?

Travis: I moved here from Virginia Beach [Virginia]. I’m originally from Michigan. I moved from Michigan to Virginia in 2011 to be a massage therapist. I’ve done a lot of jobs in my life. I moved there to be a massage therapist, did that for a few years. Kind of got burned out on it and then was working as a dispatcher for an alarm security company but still writing on the side. When I was working there I got hired to write eight episodes of a sci-fi series in the UK that to the best of my knowledge still has not come out and that was years ago now and wrote…(Watch the video interview on Youtube here). 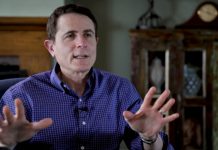