Film Courage: Do you feel closer to…I’ll just call it The Source, The Universe, a Higher Power (whatever) when you write?

Matthew Kalil, Screenwriter/Author/Instructor:  It’s a very interesting question. Not always. I think I can write and not be in touch with my higher power or source and actually be very far from it. But I think I’m doing the kind of writing that I should be doing and this is where I think I can get…(Watch the video interview on Youtube here). 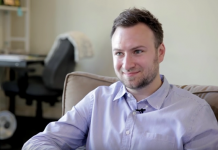