Aleem Hossain, filmmaker and AR/VR creator, assistant professor in media arts and culture at Occidental College: It’s a lot. The truth is I think that balance is never perfect. I often joke that what I think doesn’t get talked about enough is that the stage of life that I’m in right now is I don’t know that I do anything as well as I wish that I could. But I’m just trying to get all of it to at least be pretty good. Being a dad, being a professor, being a husband, being a filmmaker, they all have their demands. Every one of them is awesome. I wouldn’t give up any of them but making this movie is one of the most difficult things ever done and I don’t say that actually looking for pity but more like I think they just should be a more candid acknowledgement of how hard it is to balance those things.

For part of this movie I was a part-time professor, part-time stay-at-home dad and trying to make a feature and then you know now I’m a full professor at Occidental and you know I have two kids now instead of one when I started and that balance is difficult in so many ways in terms of just time, when can you get free to do it in terms of just resources. Those other things, there’s just spending money and that sort of stuff.

And then generally the hardest one I find is the shift in mindset that if I were to really encapsulate the phase of life I’m in right now, it’s having to shift gears and sort of take off different hats and put different hats on with no real transition points. To go from dad to Professor to filmmaker to dad, you know around that, there’s no mental space to sort of flip over and I’ve just accepted it I think. I’m just am where I am right now and I think there’s this image of filmmaking that is almost like it’s divorced from the rest of life. But again I think that this is the reality of independent cinema and every filmmaker I know knows this. I actually think we should talk about it more…(Watch the video interview on Youtube here). 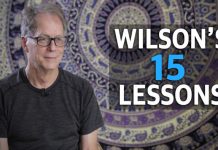