Film Courage: How do you create an awesome horror protagonist?

Film Courage: Both. I said protagonist but let’s do both.

Peter: I think it just comes down to (for me in particular) what horror films inspired you the most. I have certain ones that were important or influenced me, certain horror directors that influenced me or so than others. Certain life experiences I think, certain real-life fears. I take the DNA contained with all of them I try to put it into a memorable but memorable character.

I don’t really want to do a character that we’ve seen a million times before if I can help it. I want to make someone where you truly don’t know what’s gonna happen next or you feel the stakes or heightened. One of the tropes and one of the consequences of following the similar structure when writing screenplays is the audience kind of by this point knows where it’s going most of the time, they’ve seen everything. It’s hard to really fool them. Whenever I’m putting together a story and coming up with characters whether it’s a protagonist and certainly an antagonist is I want to do someone who (if it’s a horror piece) someone who scares me. Where that comes from just depends on what the story is but I want him to be memorable.

I want them to be unique and to stand out. I think it’d be fun if one day I did that type of story, I made one of those guys who becomes iconic. Why not have it be the next Pennywise? You’ve seen these these fun posters they’ll do where all the bad guys are in a movie theater.

I want one of my guys to be there in that group. Someone that kind of just stands out, just like the filmmaker them self has to find a way to stand out from the crowd, I’d love to come up with a character that people remember and kind of stands the test of time I…(Watch the video interview on Youtube here). 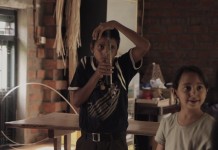