Film Courage: Have you had a moment in your life where you say “I’m going to make movies for the rest of my life?” Or you’ve never really had to have this moment where there is light beaming down on you and…you know what I’m saying? Has it just been where you’ve gone from one film to the next or has there been someone…where this voice has come to you and said “I’ve got to do this for the rest of my life. You’re were meant to do this.”

Matthew Berkowitz, Filmmaker: No, it’s every day. I wake up every day and I have the voice telling me “You have to do this for the rest of your life.” Every day I wake up and every night I go to sleep thinking that same thing.

Film Courage: Is that your voice?

Film Courage: Is that because you’ve had other jobs? Where you’re like “This is what I do. I want to love what I do even if it gets hard. And there are difficult people involved.”

So there is a tremendous amount of uncertainty being a filmmaker. My mentor (Robert A. Ferretti) he’s made every film since TANGO AND CASH to DIE HARD to ROCKY.

You know I’ll call him and be terrified and I’ll say “Bobby, I’m on the edge of my seat. I don’t know what I’m doing with my life? I just want to make movies.”

And he says “Get with it dude! I live with the same thing every day.” Right? Which is you don’t know when your next movie is going to come. You don’t know if you’re going to be wildly successful. You don’t know if your movie is going to be good. You kind of make each film like it might be your last one because you’ve got to love it like that. I don’t I think that in any point of your career you are faced with that reality and those challenges which is you just don’t do it because it’s the only thing that is there. It’s the only thing you want to do. It’s the only thing you can do. That’s why I make movies. I think that is what great filmmakers make movies is because they don’t really have another choice.

Film Courage: So how was that to hear it from someone that has so many great titles under their belt so to speak, that they live with that same anxiety?

Matthew: It’s refreshing, it’s good. It makes me understand a little bit more. It’s kind of the world that has evolved. It’s like having your own social contract with yourself. You’ve signed the contract saying “I’m going to live the life of being a filmmaker” where you are trying your hardest to make movies every day and there are no guarantees.

Film Courage: Do you think that’s what makes it so enticing aside from the creative aspect and seeing this “thing” come together, the fact that it’s not that guaranteed? And then when it does work…

Matthew: It’s magic? Yes, I think that is what’s so enticing about it. There’s a lot of moments of magic in making a film. There’s the moment of magic when you’re writing your script and you’ve stared at the screen for 10 hours and you can’t figure out what you want this character to say. You’ve been typing words for hours and hours and hours and typing in circles and finally you crack it with just one line of dialogue and then you’re off.

And it’s the same moment where you’re working and working and working and then you’re get a little bit of money and then you’re off making your movie. And then there’s that moment where you step on set and you set up your lights and you’re blocking the scene with your actors and you see that scene the way you want to shoot it and it just flows and you just capture this perfect scene and you could have never shot listed it, you could have never planned it, it just happened. And that’s cinema, that’s making movies.

Questions For The Viewers: Do you plan to make movies for the rest of your life?

A native of Los Angeles, Berkowitz graduated with honors from the nationally recognized Pitzer College; double major in philosophy and film. As a Director, Berkowitz cut his teeth on his first feature film, WILD IN BLUE. Distributed by Reel Suspects, Wild in Blue was the highest selling film in its tier. Berkowitz has been showcased on the cover of Movie Maker Magazine, Film Magazine and Playboy TV. Winner of Best film at San Tropez; Best Director and Best Actor at Madrid film festival.

Matthew has also directed many commercials and music videos for numerous companies including Converse, Sony Music, Diplo, TMWRK, Meundies, among many others. 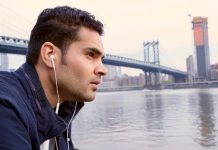