Film Courage: And have people said There is just no way you are going to do this then?

John: Oh yeah! I talk to people all the time who are experienced who micro budget to them is half a million, quarter of a million, that is kind of like that’s the lowest they will go and they just can’t conceive of it.

I mean if I priced out my movies for what they would cost under normal circumstances I would say yeah…I did a quarter of a million – half a million every time. But we just plan smart and we shoot the scenes that we need to shoot and we work within our limitations and embrace them.

I can’t tell you how many times I don’t think I’ve had a film shoot (even with pickups) go past 16 days. Most of it, I mean our last film we shot principal in I think it was ten or eleven days and then did two days of pickups. We just were a very efficient group, we didn’t work over 14 hours that I can recall. If we did it may have been one day, most of it is 12 (12 to 13). Everybody gets fed. You just roll with it. But I would love to have a quarter of a million dollars.

John: Yes and that’s a conversation you have with the writer. You have to talk to them and say Hey, do we want to…are you open to the idea of changing this? Given the resources we have financially we kind of did an analysis (a general over analysis). It’s going to take this many number of days to shoot so it’s got fixed costs. Daily rates for everybody, putting people up and then we’ve got whatever other things we have to do, how many actors we have to bring in (that kind of thing) and you should fight for a compromise but it’s one that is a shared vision as opposed to You’re right and They’re wrong.  When I read scripts today, I’m definitely looking at that and seeing it add up and I’m like Okay, locations, days. I mean there’s ways you can do some, bringing consolation and stuff. It’s not all like, when you’re reading the full story you’re like Oh, there’s only like four locations here. Four main locations, it’s easy. It makes it look like it moves around a little bit more, that kind of stuff.

I don’t determine my working on something in terms of what budget I’m going to do it at first right? But I’m going to access it from a story level to see what are the story points that we need to hit that maybe we don’t have a chase scene. Or if we have a chase scene we shoot it a certain way. The chase scene in our movie [A CHILD’S VOICE] when he goes to pick up the girl and they shoot, I would have loved to do a whole different other stuff there but that’s…and it still worked but I had to do certain angles just to see the idea and in the editing room Edgar [Director Edgar Michael Bravo] knew this but when he was shooting and they had done the shot list they figured we can do all of that in one day (in actually a half a day), we shot that entire chase and rundown scene in a day and it worked.

Yes, there’s ways to get around it, you just have to be creative.

John: Mo’ Money, Mo’ Problems! I mean if there’s something that I’m really passionate about and I see that we can do it for X, I’m like Okay, do we want to do this? Do we want to do this without a script supervisor or a first AD? Edgar does that while he is directing. So yes, that’s the hard part but in reality it’s not like now We’ve graduated to this level I’ve never looked at it that way. I just roll up my sleeves, I do wardrobe, I do props, I’m doing whatever, wherever there is a hand that’s needed, right?

And it’s not because I love doing it but it’s needed otherwise. I’ve got to come up with that cash for somebody else to do it.

So in short, yes I would like more money because I’d like to give the time that we would love to have where we could do all of the things that we have to cut out in editing because we didn’t have enough time. Or we didn’t get to the actor…we didn’t have enough time to get the actor to be able to get to that level that we wanted and we only had a certain number of takes that we could do because the limitation of budget and time. These are the things that you have to plan out and know what you’re doing in order to execute that and still get a good finished product but money doesn’t always solve that. If it’s the crux of the issue that is money, then I think you’re going to fail.

If it’s innovation and knowing what your resources are and where you need to put them (what scenes you need to focus on). As a director if you’re focused on getting Academy Award winning moments every single take and every single scene, you’re going to be in deep trouble. Because in reality you have certain story points where you definitely need to work with the actor and you definitely need to build that up because at the point of where you are in the story it is very important because you’re coming to the end of the film where everybody is riding now. They’ve followed the first and the second act, now we’re in the home stretch and everything has to pay off. So you don’t want to compromise where you’re like Oh my gosh, I spent all of my time upfront here front loaded in the story. Where I really need it to be the most impactful is in this area where we are seeing the revelations and all of the turns that are coming, all the structure that we talked about in the screenwriting, all of that has to hit. You have to make choices because of the limitations, if you have more money you can just expand on that, it gives you more breathing room, it gives you other personnel to come in and take the concentration of the director and just focus it solely on the actors, not have to think about the schedule, not have to think about where we are in the script, the continuity, that kind of stuff. 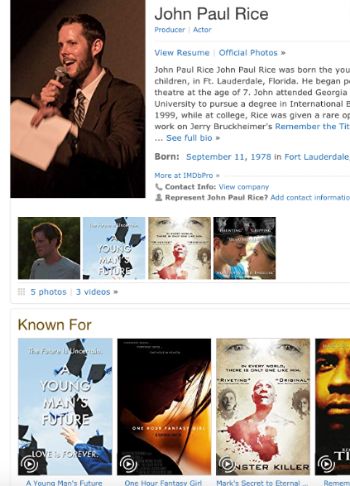 It’s really remarkable, I mean when people see our films and they go My God, I can’t believe you guys did that with such a small crew, in so few days, with so little money. That doesn’t just happen, it’s because it was planned. And I give a lot of that credit to Edgar because he’s really great with that. I mean out of necessity he’s had to do it but the only reason that I want more money is that his entire focus could be working with the actor, getting them to the emotional beats that he’s really desiring because he knows, he gets excited by the potential of what he’s seeing come out, come through and working with them and it’s a trust and it’s such a beautiful thing. I mean as a producer I may never direct a movie but I can always enjoy the trust between an actor and a director working together. I want to finance that potential and make sure that that money is put in the appropriate places to get the maximum impact so when the audiences sees it they’re like Whoah! They’re blown away like that was a great performance. That was real. That was…I felt I was there. That’s what I’m going for. So if it comes at $30,000 or $50,000, $100,000 or $200,000 whatever it is (or millions more), the same result should occur. If you do everything correctly, if you follow what your passions are, you do all those points that I talked about, I don’t think you can fail. You’re going to learn a lot. You may make mistakes but I don’t think you can fail. You’ll stumble, you’ll stumble forward to the finish line with a very good product that can be enjoyed not only through the people who are going to receive it and see it and take something from it.