Film Courage: Isn’t asking questions a good thing? Or does it show weakness?

Mark Sanderson, screenwriter/author:  You mean of a producer? It does but there is only so much time you’re going to have in the office, and if there isn’t a shorthand between you and the producer (like if you’ve worked together for five years), you don’t know what they mean and so if you start going I don’t understand what you meant? It’s not going to be upon them to be like I’m not communicating properly, it’s going to be You don’t understand. Yeah I understand.

One time I was in a meeting with a producer and I had never worked with him before and I was working on assignment and he said something off-the-cuff which was kind of insulting like Could you explain it to him? It’s like Screenwriting 101. And it went over my head and it was like Oh my Gosh, he just insulted me. And I let it go but it was like Who were you talking…I get it but you don’t get it…I don’t know how you work. You’re all over the place, I’m trying to grasp a thing which changes to another thing but you can say that. 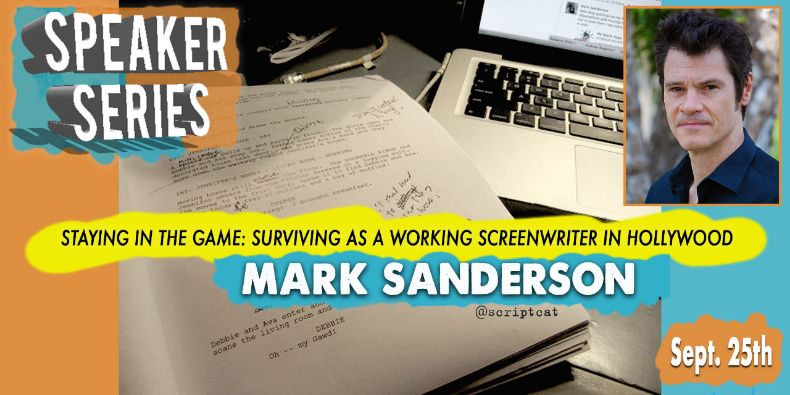 In this 2 hour speaker series (that will include Q&A), screenwriter Mark Sanderson (aka @scriptcat) will take us through his journey – tickets are available via Eventbrite for this special night with Mark, Tuesday September 25th from 7-9 pm in North Hollywood. Sorry, no tickets at the door.

It’s a fine line, you’ve got to know how to apply yourself when you need to and not just like fighting your battles with notes.

In one situation, I worked with a producer who handed me off to the executive producer who I had never worked with. He went off to do something else and I was with them and I was the defender of our screenplay (the last line of defense). And so they were talking by Skype and this and that and they say Well, we want to change this thing at the end. And I was like Oh, no, no, no, no because we really worked. So I decided to make that my battle. It wasn’t a battle but to talk back and discuss it and I really hit home because I knew if they started pulling these lynchpins out I was going to be Are you…? And they had their own reasoning I guess and so I defended it and there was a big silence and the producer is quiet and he’s like Okay…moving on. And I was like I won that battle?! I wasn’t going to win two battles. Now if he has another thing that I have a problem with, it turns back on me and I’m the problem. So you really have to know your battles and pick and choose them, because you don’t want to be…even if it’s a perception that you’re difficult. Like Every time we have a note, is this writer going to be fighting us?

No, on the ones I really have to fight, I will fight. And I think that they will appreciate that you just don’t roll over, that you’re thinking (like you said) ask questions. Why are we doing this? A lot of times no one knows the script like the writer because you’ve lived and breathed every character and everything and it’s easy just to say Well, make that change. Because they’re looking at bigger picture things not the details and you have to be the one going Whoah, this not be a good idea because of this? And they’re like Oh? And then you convince them and they go I think that’s right. Or they go This writer is a collaborator. It’s not going to be like a scribe where they go Yes sir or Yes ma’am, whatever you’d like. It’s a fine line. You don’t want to fight, you’ve got to pick and choose wisely.

Question For The Viewers: Was it helpful for you to hear this from another writer?

Mark has written 36 screenplays in genres ranging from comedy to drama. Early on, his spec sale, the WWII indie feature “I’ll Remember April” premiered at the Palm Springs Int. Film Festival, and has since had twenty screenplay assignments that include Lifetime Network’s “An Accidental Christmas” and “Deck the Halls,” the stylish indie noir feature “Stingers,” action-packed thrillers “USS Poseidon: Phantom Below” (aka HereTV’s “Tides of War”) and SyFy Network’s “Sea Snakes” (aka Fox’s “Silent Venom”), Lifetime Network’s highly rated thrillers “Mommy’s Little Girl,” and “A Night to Regret,” and the LMN Network premieres “Mother of All Lies,” “A Wedding to Die For,” “One Small Indiscretion,”“Hunted by My Ex,” “Family Vanished,” and the upcoming thriller “My Daughter Vanished.”

In addition to his screenwriting work, Mark is also a script doctor, screenplay consultant, and author of the book, A Screenwriter’s Journey to Success: Tips, tricks and tactics to survive as a working screenwriter in Hollywood published last year on Amazon.

Tickets ONLY sold online here. Limited seating available. NO tickets at the door.