Film Courage: Wendy, we had this comment come in a couple days ago on Youtube and the viewer asked “What should writers be concerned with when revising their second or third draft of something?”

So then the danger is when you lose sight of what your core vision is. Now there are two ways this can happen.

First if you’ve never had a strong vision to begin with then in each draft the goal should be to refine what that is and maybe the writer needs to do an outline first and be really clear.

And I recommend I think [Author] Blake Snyder has a very effective beat sheet that’s a useful tool. Again I tell writers that use it as a general guide and a general map but don’t feel that you have to adhere to “Oh, I’ve got to…(Watch the video interview on Youtube here). 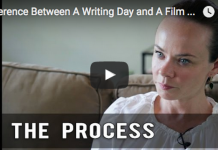