Film Courage: So I looked at your IMDB and is your first credit THE PERFECT NANNY with Bruce Boxleitner and Tracy Nelson?

Christine Conradt, Screenwriter: Yeah…I think that is the first one?

Film Courage: Okay, great. Is that the one where you got the job from the re-write and then the producer wanted to hire you?

Christine: No. I got fired off that project?

Film Courage: On no!

Christine: That was with a producer where I was working as an assistant in development and then left (he sold the company and I left). He invited me to come back and do this rewrite, which I did and I think I did two drafts and he hired another writer (which was fine).

Film Courage: So the one [job] that you were fired off of (without giving away too much information), did you see what it was [that caused it] or was it something that was out of your control?

And so I fixed the character stuff and then I think they hired another writer to fix all the structural stuff that was wrong with it.

Film Courage: And so at that time did you see it as structure, like a structural defect or no?

Christine: No. I couldn’t recognize that at that time.

Film Courage: Interesting. So then once you were excellent at structure you saw “Ahhh! That’s what it was.”

Christine: Right. And I think also just over time understanding, getting to know more what they want when they tell you we need this or we want this, what that means and how to incorporate that into a screenplay. We want to add edge to this, it’s not edgy enough. That’s a very obscure idea. So hearing that (when I was that early in my career) I don’t think I understood how to implement edge. And now when someone says that, I say okay. Now I understand the questions to ask and they can tell me what they really want and I understand what they mean by that. 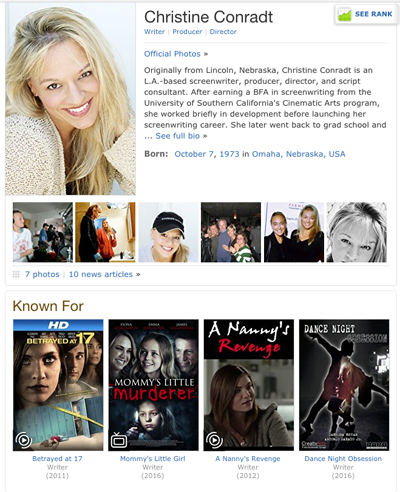 Film Courage: Interesting. So let’s suppose it’s a housewife that has everything perfect and nothing is wrong. How can you incorporate some edge for that [story]? Because I am picturing that this is the Lifetime movie that I knew, which is still interesting but what edge would we still add to that character?

Christine: Well a lot of times they might have a dark secret or something in their past that they feel ashamed of and they’ve kept from their husband. So something like that that is just kind of lurking in the background that seems to resurface and it doesn’t even have to be kind of the A story. It an just be something that complicates the A story, right?

So let’s say you’re a housewife, you’re trying to get pregnant, she’s finally gotten pregnant and she has this ex-boyfriend who is getting out of prison and who still wants to be with her. And so now he is going to come back and complicate her life. And that may not be the A story, but it’s still something that now she has to tell her husband who this person is and that kind of thing.

Film Courage: Right. And there is the edge.

Christine: And there’s edge and intrigue to that. So it’s adding to, it’s rounding out that story and making people real. Because everybody has things that they are not proud of or whatever. And so this is something that you can add those and we can go even further in the Lifetime movies or TV movies (so that kind of stuff).

Film Courage: So is the aim to show sort of the perfection and then as we said before backing out to show that it’s not perfect?

Christine: I don’t know if it’s to show perfect. I think a lot of what intrigues people are the pretenses, right?

I think so much of what we try to do on Facebook is to show everybody in the world this great life we have. You don’t take the picture of the crappy Ramen noodles you made last night because you were so tired to cook. You take the photo when you’re at the nice restaurant, right? Or this beautiful thing that you made, that you spent hours on. We put out a life that we want other people to see because that’s where we think they are forming their opinions of us.

The irony is that most people care more about themselves than they care about anyone else anyway, so they are not even forming those opinions. But that’s what we do. Our characters are the same way. Our characters live lives based on what they think they should be living. And so that’s why it’s fun when you can kind of flush these characters out and give them these things in their past or things that they’re doing or temptations or whatever that cause those little things of conflict.

Film Courage: And they always have to have a great place to live. I mean, I’ve never seen a woman in a Lifetime movie live in a bad place.

Christine: They live in beautiful houses. There is definitely an escapism element to that as well. 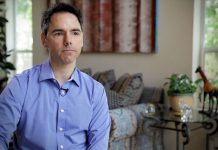 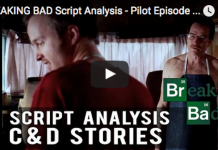 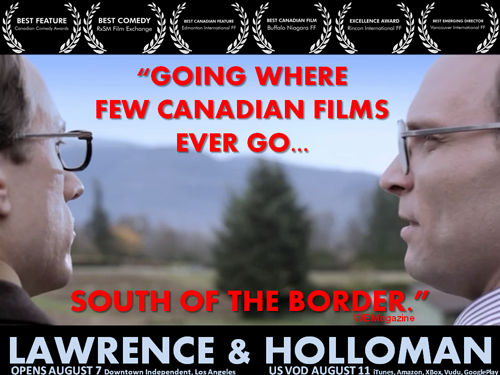