Film Courage: Mark, advice to people who are caught in two worlds because the reality of being here [Los Angeles area] is that may be the case for a decade, for some people maybe even more and at some point they will cross over and they will be hosting their own parties and for some it may not happen. Talk about keeping your mind right and keeping your work ethic right.

Mark Sanderson: Well, that’s difficult. It’s like training. I used to run as a runner and that discipline of that constant was really important. And I would run no matter what, even if I was tired. It’s that same work ethic that you need for writing because I see so many writers who say “Huh?” And it’s difficult, I understand. I tell some writers that “Oh, I just did a 10-hour day.” And they are like “10 hours?” And I go “I have to because I have an assignment and it’s due and I have the luxury. That’s my job, thank goodness.

Now when I had a day job only once in my life for 2 years, I worked at a law firm. I had to come home from a full day of work (I was an assistant) and at 6 o’clock make dinner and then write until midnight. And then go to bed, 7 a.m. go to that job. It was having 2 jobs at once and then on the weekends people would say “Oh, come on…do this and that.” And I’d say “Well, I have to write.” “Write? What are you talking about?” And I’d say “Well…” And it was terribly exhausting and I can see how it would chip away at you, especially if you have a family and a lot of different concerns pulling at you. That’s why you have to really close the door and say “This is my time.” And it cannot be interrupted.

It is hard to do but you really have to stay disciplined and also I think you have to have the fire and burning passion to really want it more than anything else. Because I never put an expiration date on my dreams. And I remember people saying…I was at dinner one time and a friend of my brother’s said “Well, what if you don’t make it by 30?” And I was like “30?” And I said “Well, I don’t know. What’s 30?” And to him he was projecting his fear upon me and I go “This is open ended, you know?” I’m sorry because it’s good and bad because you don’t want to fool yourself like you are saying, where after 10 years and you have nothing.

I mean I think after a certain point if you’ve really exhausted all of your abilities and nothing has happened, you might consider something…maybe writing is not for you? Maybe this pursuit of a career is not for you? And it’s a choice and no one is forcing you to write screenplays. It’s a dream. It was my dream since I was 11 years old. So am I going to achieve it? Am I going to achieve it at a level that I want?

Because when I worked in the restaurant while I was going to film school, I knew people that were actors who said “Well, it’s not worth it for me if I’m not like Brad Pitt.” And I said “Oh, really? So you think you’re just going to fall into it and be A-list?”

Now most working actors or the co-star character actors work all their lives. The leading person, the leading man, leading woman have to carry the film and how many…I mean, I’m sorry you look at it and plus as you get older you look at it differently and you say “Well, I’m blessed to get up in the morning and do what I love for a living and get paid for it and see it end up somewhere and people respond to it negatively or positively.” That’s it. Yes, continue to strive for more and other projects and different things but it’s hard and the important thing too is to have people around you that support your endeavor because I’ve lost friendships and relationships with people who said “Well…” And they drew a line in the sand. And they said…And I was like that’s not a good thing to do and what about the last X number of years I’ve been doing this? You’re just going to have me throw that away?

You know, the lack of understanding about how much filmmaking and writing was such a part of my being almost like that of other creative endeavors like drawing and things like that. But this is like who I am and to have someone with you not understand that it’s really…and that’s the hardest part that so many elements (just like in making a film), so many elements have to go together and click. The same way with forging a career and as you’ve interviewed many different people, everybody will tell you a different story about how they “made it.”

I was doing a seminar recently and someone asked the question about making it and I said “Well, I think I don’t know if you ever make it?” I think getting your next job is making it and continuing to stay in the game is making it. There’s nothing guaranteed. If you’re on a TV show, the show is going to end. And then you have to get up and we’re like gypsies. Find another job.

I have a movie shooting right now in Los Angeles. When that ends, I mean luckily I have a few things already going (set up) job wise, you have to find your next job.  It’s just the case. It’s difficult but no one said it was going to be easy.

Film Courage: Before we wrap up on this topic, I just want to ask, going back to that day that you’re working this shift at wherever it was, the top of Mulholland Drive or wherever it was…

Film Courage: Beverly Hills…okay. And let’s suppose you’ve broken down the event and you’re driving down this mountain or wherever or maybe not a mountain [in Beverly Hills], what’s going through your mind? Your name is in Variety on this day.

Mark Sanderson: Well, I stopped at the newsstand before the job and picked up a pile of Varieties, you know because you have to. And reread it and I wasn’t on the cover, the company was on the cover, but I was on like page 13 with a paragraph on how they discovered me. It’s so nice to be discovered and I’m here pouring coffee for these people. It was freak…there was a fear that somehow it was a big fraud and it was never going to happen even though…it was terrible. It was hard to really lock in and then you get home and it’s very depressing. You’re like there’s no crowd cheering, there’s no one like “Wow!” But then being pragmatic and saying “Well, I have to pay bills.” And there’s no embarrassment about doing a job that you have to do because that job allowed me to continue to stay in the game. Now yes, the movie was optioned and as movie options go there’s not a lot of money sometimes and then the movie developed 18 months, it was in development with me. So you’re talking about it was 7 years after I wrote it. So it took 7 years from when I finished it to when I finally found the company and it was made. Not all scripts happen that way. But I’m talking about a spec and so this is a long process with a lot of fear that can be involved.

I always look back on these stories but not at that time maybe and say “This will be a good story for the book someday.” Or to tell someone how these things happen. There’s a reason why I think we go through everything is to learn something. And if we do, maybe pay it forward and that’s kind of my reasoning for the book [A Screenwriter’s Journey to Success: Tips, tricks and tactics to survive as a working screenwriter in Hollywood] is to try to pay it forward and saying I went through all these crazy knocks and these pitfalls and you will, too. Maybe more, maybe less.  But maybe if you zig and zag, it will help you a little easier. But it’s all difficult for all of us because we also have to sit in front of the blank page. That’s where we are equals as screenwriters.

Question for the Viewers: Do you have an expiration date for your writing career? 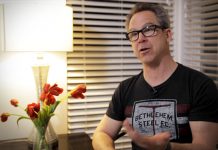 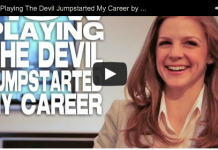 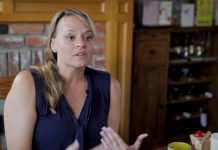