Film Courage:  Larry why do you feel that BEETLEJUICE sold?  Why did the screenplay sell (in your opinion)?

Larry Wilson:  You know…this is going to sound so pretentious. But when I decided I was going to be a writer again and decided I was going to do it with Michael [McDowell].  In my mind I said to myself…(this sounds so awful maybe) but “I’m going to write a classic. I’m not just going to write another movie. We are going to going to create a classic.”  And who knows what that means?  I know it sounds obnoxious.  But we knew probably…I don’t know…some 20 pages in that just something was happening.  And we weren’t thinking about demographics.  We weren’t thinking about who the audience was going to be.  We weren’t thinking about any “commercial” aspects of it.  We were thinking What’s good?  What’s funny? What’s moving the story forward? What are the zaniest, craziest ideas we could have.  And it happens with scripts and it happens in your writing.  There are just times that you feel that you’re in a zone and place that you are so connected with yourself.  And you are so connect with what your vision is, that if you can get it on a page, other people are going to see it and feel it to.  And that movie as that.  We didn’t know what was going to happen with it.  When the movie was finished there were people at Warner Brothers in the marketing department that absolutely hated it.  They wanted to change the title the HOUSE GHOST and dump it. And back in the days when you’d put it in a thousand theaters and let it run a week and hopefully it would go away.  That wasn’t everyone and we had David Geffen on our side so we were protected but it was hardly loved but I knew who we were writing it for in my mind.  This is a very 80’s reference…there was a band (there is still a band) The Cure, The (great) Cure (a band I loved).  And I had gone to see them at the [Pasadena] Rosebowl. A huge concert (maybe 50,000 people).  And it felt to me that it was 50,000 teenage girls in black!

Film Courage:  I was probably one of them!  I was into The Cure [Laughs].

Larry Wilson:  Right! And the Winona Ryder character “Lydia” came out of that.  And I always thought that’s who the audience for this movie is as we were writing it.  That for me (and maybe for Michael) that was who I thought this movie was being written for.  And it’s really a family story and it’s really about a girl who needs a mom and a dad because her real mom and dad don’t understand her and don’t spend enough time with her so she ends up with two ghosts.  That’s the heart of the movie and that is what I was writing toward.

So finally it’s released and I go to see it, nearby where we are sitting now at Universal.  It’s a Friday night.  It’s the the first Friday night.  And I watch it with the first audience (a real audience for the first time).  Of course there had been some test audiences.  And people are coming out of it either loving it or hating it which I thought “Great!  That’s exactly what we wanted.”  And that was Friday night.  Then Saturday night I went back and saw a bunch of teenage girls who had gone into their closet (having seen in on Friday night) and came back dressed like Winona Ryder [the character Lydia Deetz].  And I thought “Okay.  It’s a hit! We have connected with the audience to the point where there are already dressing up as Lydia.”  And then there was a marketing meeting at Warner Brothers (it may have been on a Monday).  And it had surpassed everyone’s expectations in terms of the grosses and the audience feedback.  And it was obvious that it was going to take off and be something special.  And again in this “no-name zone” [Laughs]…there was this marketing person who was a guy who I remember would wear a scarf no matter what the temperature was, okay? And I remember Tim Burton being there and David Geffen being there, “The Michaels,’ and myself.  And this marketing person, all he could say, the best he could do was say “Well, at least we got the little girls in black to come see.” And we walk out of the meeting and Tim said “Well, who the “F” did he think we made it for?” [Laughs].

And when things are going well in my writing (and I think it’s true for all writers), if you are intensely self-conscious about who is your audience, who is…”is this for the 12 to 16-year-olds?”  If you’re doing that you are not writing well. And you get in a zone and your story starts telling you.  You are not telling the story.  It’s emerging from some place within you.  And that’s what BEETLEJUICE was and I used to say to Michael sometimes because I could feel it going well and I’d say “Michael, you know we’re going to have a toy line.” And he’d say “Shut up! Shut up! Let’s just finish the script.”  You know?

But it’s a very hard thing to explain.  It’s an epiphany after epiphany and you feel like you’re just onto something bigger than you.

Film Courage:  Well going back to the other “no-name person,” did they ever reach out to you [after the success of BEETLEJUICE].  Here they put you in a spot that you’re almost on a ledge (metaphorically).  And you’re just elated with validation that this worked (maybe you didn’t totally expect it).  But did that person ever reach out to you?

Larry Wilson:  No…because that would have required a certain amount of humility and a certain willingness to say “You know what, I guessed wrong on this one.”  And not everyone has that ability.

Question for the Viewers:  How does this relate to your experience as a writer?

Marketing Film Outside The Lines 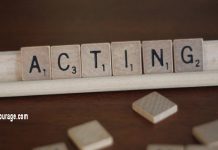 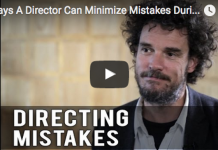 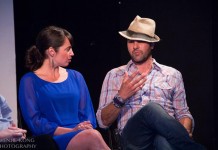