Film Courage:  Is there a specific kind of story a first-time screenwriter should make?

Larry Wilson:  Ah…Yes!  What that story is and it’s not that cliche of ‘Write what you know’ because I’ve never written what I “know.” I write fantastical worlds and supernatural stories and all of that.  But write what you feel and what’s in your heart and write something that means something to you.  And you know I was a script reader for gosh…probably a decade.  And I was reading 7-8 scripts a week.  And the rare one was the great script. And when I found that, this was a very exciting day at the office.  And sometimes the really terrible scripts, they were fun because they were so God-awful.  But the ones that got really exhausting and really irritating as a script reader who has to read a script, synopsize it, write a comment about it, and then pick up another one, read it and synopsize it, were ones who you could tell were written by people who were looking at what last year’s hit was and trying to imitate it.  And those were deadly!  And they weren’t good.  They weren’t bad.  They were safe and mediocre.  And any young writer or old writer, anyone who is just starting to write, write something that you feel. Write something that comes from the heart.  And people may not think that BEETLEJUICE is a personal movie but it’s an intensely personal movie.  It was intensely personal for Michael [the co-writer].  And I didn’t know that I had a theme until I had enough work to realize I had a theme.  And almost everything I’ve written are about broken families who are put back together in some bizarre way because I came from a broken family.  So I like to think that my work has a sense of heart and a sense of compassion and a sense of humanity.  No matter how bizarre it is, no matter how weird the worlds get.  And you’ve got to write something that you feel, that you have some passion for or why do it?  It’s just too hard.  It’s not an easy job.  I personally can’t imagine saying “Well, this was a hit. So now I am going to write my version of that.  It’s not really what I care about, what I feel.  But I can imitate it well enough.”  I can’t imagine spending a year of your life doing that.  But people do it all the time.  And people usually write mediocre scripts.

Film Courage:  Is being safe something that has never appealed to you?

Larry Wilson:  I don’t know how…in my career and in my life!  Safe hasn’t factored into it.  Not always the best decision, maybe?  But I sort of like jumping off cliffs.

Question for the Viewers:  Is what you write intensely personal? 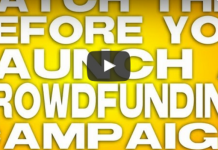 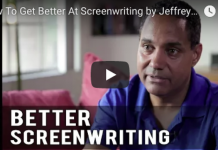 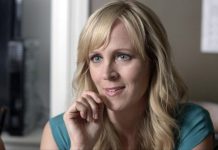 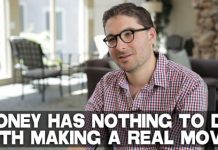