Filmmaking is a series of constant surprises, setbacks and solutions. It has been for me since day one of pre-production of the first film I directed.  These days this applies times four, since I also shoot, produce, and edit my films. Suffice it to say that in my world things going as I planned would be equivalent to pigs flying in snowy hell. After battling on one too many films with actors, time, location, budget and everything in between I was faced, some years ago, with two choices: give up or give in. Giving in, if you have skills and good instincts to back up your vision, could open your filmmaking career to many wondrous things. They have for me once I took the plunge.

By the time my supernatural/sci-fi web series, The Third, launched in 2010 I’d already clocked in plenty of time behind the camera as a one man band shooting documentary films. The one man band thing came out of necessity back in 2005 when a few days before my short film, Absence, was scheduled to shoot, I lost my crew and a couple of main actors. With loaner equipment, I had for that particular week only, I had to move forward, pick up the camera, set the lights and re-work my story on the go. That experience taught me that when your back is against the wall the only way to move is forward.

The thought of doing a series never occurred to me until the idea for The Third came to me in early 2010. I’d been planning to work on a project with Philip Willingham, star of The Third, but I had neither the resources to do a feature nor the interest to do a short. Attempting a series was terrifying and exciting at the same time which is a great reason in my book to do one. I’m a huge New York history buff as well as a fan of historical fiction. But I didn’t want to do a “straight up” historical fiction set in NYC. I wanted something extra, something that caters to viewers who are like me. Great ideas sometimes stem from a single “what if” question. In my case it was: What if the island in the series LOST was Manhattan?

Armed with that premise I set out to enter the world of web series. I quickly realized I did not have the budget to pull off a lot of ideas that were circling in my head for the show.  I did know I wanted to shoot on location and take advantage of Manhattan. With actors like Phil, and all the guest cast that followed, by my side, I knew I could pull it off. Kevin Mahonchak, a composer and friend, loved the idea and was on board; he and I had been discussing working on a project for years. I was the solo crew member and wanted to improvise based on opportunities, or obstacles, at a moment’s notice.

This idea was put to test in the second episode of The Third, EXITS. After the PILOT episode went online, Philip called me up and said that a friend of his would be interested in playing a part in one of the upcoming episodes. It turned out to be Jeff Stewart of the ITV television show, The Bill. I was flattered that an actor of his reputation would be interested in my little show. The problem is, he lives in the UK and would only be available for two days when he came to attend a film festival in New York late in July of 2011. Now I’d already planned out an arc for the first season and nothing in that plan had a suitable part for him. Then there was the matter of having two days to shoot all the scenes with him. And not your typical full day of shooting. We’re talking 6-7 hours per day including breaks, lunch, and prep.

But I didn’t want to miss this opportunity so I decided to write a new episode around him and ditch the season arc I’d planned. Jeff always stayed at Hotel Chelsea when he visited New York so I thought, to maximize time and include a historic location in the series, I’d simply shoot in the hotel room. By the way, this was all happening a month before Jeff was scheduled to be in New York. I spoke with him over the phone and explained that I wouldn’t have a script for him, or anyone, until a fews days ahead of the shoot but I could explain to him what mood I was going for. Jeff, being a TV veteran, is accustomed to last minute changes, pages, and demands. He’s done that for 24 years on thousands (not a typo) of episodes. Philip, although coming from a strict theatre and dance background where every details is mapped out in advance, can take to similar situations like a duck to water.

A few weeks before D-Day, I had an outline of a script. Six characters including Phil and Jeff’s. I had yet to cast the other guest actors. When in doubt, go to Craigslist. While putting casting notices on CL means being bombarded with everybody who breathes responding, I left it to the hands of Karma. The emails began filling up my inbox and I raced to delete most of them. The actors who ended up playing mother and son in the episode were the last two submissions I received from that Craigslist ad. As soon as I’d talked with Bari Hyman and met with Jeffrey Wisniewski I knew they were the characters I had imagined. I’d let everybody know pretty early on that I’d give them their pages the day before the shoot or during and that no one would get the full script.

Jeff’s room at Hotel Chelsea was a big part of the story and those pages needed to be shot no matter what; a total of 14-15 hours of shoot time altogether. D-Day was in three days and Jeff arrived in town. I visited him at Hotel Chelsea, meeting both for the first time in my life. I entered his room on the fourth floor. My “Hi Jeff, nice to meet you” was followed by, “Where the hell is your bathroom!?” My script has a dead body in the bathroom (you’ll see what I mean). It pretty much opens the episode. Turned out that Jeff and his next door “neighbors” shared a bathroom out in the hallway. F*#k. Strike one. Then Jeff asked, “Did you get permission from Hotel Chelsea about filming here?” Strike two. But in my defense, emails I’d sent to the hotel about filming went unanswered as well as phone calls I made were met with “please email”. What I didn’t know until two days after the shoot was that Hotel Chelsea was in the midst of handing over reigns to new management. This strange turn of events that had caused stress during the shoot turned into an opportunity. The new management, without warning, kicked out all the guests of the hotel, including Jeff. That event resulted in a New York Times piece that featured Jeff’s experience, mentioned a you-know-what web series with pictures from you-know-who.  Karma.

The shoot itself was filled with happy accidents. We spent the first day shooting all the scenes played by Jeff and Phil’s character. As happened, I’d re-written most of the dialogue between them the night before. It started with an innocent tweak here and a tweak there. But something inside me sparked and new inspired words replaced old tired ones. Professionals as they are, the two actors studied the new pages, ping-ponged the lines back and forth and were ready for each scene within minutes. I allow for improvisations in my movies and I always ask actors for ideas when a scene doesn’t play as I’d written it. Sometimes it’s just a matter of the lines being clunky or sometimes it’s a matter of blocking. Cyril’s (Jeff’s character) look was never defined but came together the morning of the shoot – glasses, suit jacket, bare feet.

Another seized opportunity came in a scene in which Jeff’s character makes a call from a pay phone. It wasn’t in the script. We’d gone downstairs to see off Jeffrey Wisniewski after the shoot. I pretended to be a tourist with a DSLR around my neck and when we were heading back up I asked Jeff to get in character and walk in the phone booth and make an “important phone call”.  As we waited for the elevator to go back up to the room, I said to Jeff again, “In character, all the way to the room.” Jeff, as if turning on a switch, was in character and we filmed that sequence. Both the pay phone and the elevator scene became a big moment in the episode. Carpe diem. The conversation you hear Jeff’s character have in the phone booth? Written months later and recorded blindly over Skype.

How did I solve the bathroom in the hallway problem? I simply cheated and shot around one section of the room so it looked like, after editing, that the bathroom had always been there. What does a set of carpe diems mean when you’re putting together an episode that is supposed to move a series forward? I’d left the two day’s shoot with great material but they were very different from what I’d planned on shooting. But at the same time, I’d left it open to fate to let me come to a place with that episode. It was an excruciating and exhilarating experience at the same time. I shot the remaining scenes in November after reworking a chunk of the script as a result of the July shoot in Chelsea.

Then a set of real life events caused a halt in post production. But that was a blessing in disguise since it gave me some distance from the footage. And when I sat down to edit, I realized I needed to make yet another round of re-writes in the editing room. I love editing. EXITS, without the decisions made in the editing room, er my desk, would not have been what it is today thanks to excellent performances by the actors and the haunting score by Kevin. The original seasonal arc I’d planned would no longer work after this. But the new arc stemming from EXITS is even better. Had I not said yes to working with an actor I admired despite knowing everything could go wrong in an instant, I wouldn’t be writing this article, or new episodes, from where I am today.

In life, as is in filmmaking, you can reach Point B from Point A in any number of ways. But it’s how you’ve prepared yourself before you started at Point A that will make all the difference. Can you remember the decision you’d made, no matter how mundane it may have been, that lead to this moment of you sitting in front of this computer and reading this post and watching my webseries?

The Third – EXITS – Chapter 1 from Emon Hassan on Vimeo.

Emon Hassan is a New York-based filmmaker & photographer. His photography & video work has appeared in The New York Times, The Atlantic, PBS, BBC & The Washington Post. You can connect with him on twitter at @emonome The Third web series lives at TheThirdWebSeries.com.  Also, check out Emon on Facebook. 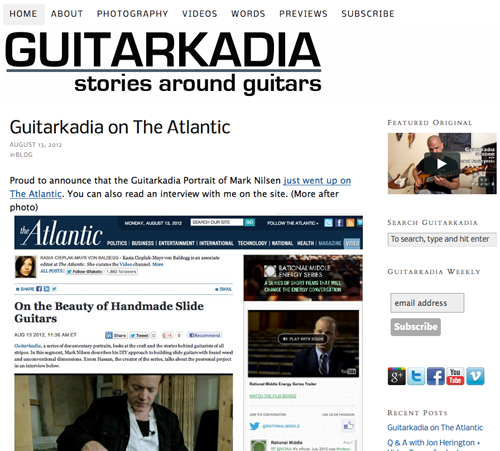 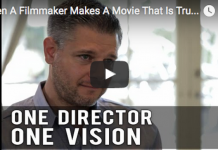