I was asked by Glen Maney to do a review on The Limelight. He wanted me to be brutal and honest. He knows I spend practically all my non-working life watching films and I was honoured to be approached. So here’s what I thought.

The Limelight is the story of a middle-aged comedian’s (Gary Shand) search for fame.

The lead is played to great effect by Glen Maney himself, who I’ve seen live as a comedian and quite enjoyed but never as an actor. I was impressed. Very impressed. I think the fact that he wrote the original script, although by his own admission, the end project was largely improvised and ideas had been introduced by Co-Director, John Robson and many of the cast, meant that he knew the character inside out and this possibly assisted in his performance, but it was impressive all the same.

Gary Shand has to fight against a marriage break-up, alcohol dependency and oncoming mental illness because of the pressure brought on by his quest and his own short fallings.

He is also given a bigger mountain to climb because of his manager. Played by Ricky Grover, who I loved as ‘BULLA’ from the 11 O’clock Show, but who most of you will know as Eastender’s Andrew Cotton, this character (Al Moran) is relentless in his efforts to put Gary down and promote his rising star Sean Bollinger, played by (Show Me The Funny- Winner ) Patrick Monahan. His treatment of Gary is cringe worthy and  in places wicked, but it’s one of the funniest performances I think I’ve ever seen. His every line seems to be comedy gold and whether it’s improvised or written, I have to say I was reduced to tears of laughter by some of his scenes.

Phil Nichol as The Busker and Glen Maney as Gary ShandThere’s a stand out scene where Al Moran is hanging upside down and is explaining that Gary is dead, that had me laughing after the film has finished, but I won’t give away the dialogue.

Whilst Ricky Grover, ably supported by Glen Maney, carry the film. There are other excellent performances.

Jay Sodagar is brilliant as Gary’s landlord Mr.Ali and again had me laughing although he was piling more pressure on the hapless Gary Shand.

Patrick Monahan throws in a solid performance as Sean Bollinger and whilst some of his dialogue seems a bit ‘rambly’ some of his lines and their delivery are again very funny.

Sonya Roseman who’s an actress I don’t know but who is very easy on the eye does a great job as the ‘straight gal’ and this lets Glen Maney show his comedic side for a change in what is after all a very dark and pathetic character portrayal. She plays the lead lady, Sara Meo, who is an ex-escort and a millionairess, after marrying one of her elderly clients who subsequently died.

My favourite scene of the film is the bathroom scene prior to Gary being promised sex by Sara and for me, it was one laugh after another and largely down to great comedic timing on Glen’s part and some tight shots from John Robson.

I think it’s one of the funniest scenes I’ve ever witnessed in a film.

Another scene I’d like to comment on is the bar scene with Chuck the bar barman played by Craig Campbell. After Gary has always had the sympathetic ear of a barman called Adrian (played with his usual professional approach by Mark Monero –Wild Bill –Eastenders), Gary meets new barman Chuck who has psychopathic tendencies and is definitely not a kind ear! The result for me again was hilarious. The release of tension in the scene and the chemistry between the two characters is just spot on. As is their comic timing.

So were there any downsides? Yes, there were. This movie cost about £25k to make and took five years apparently and was made when cast and crew were available. It looks in places like a movie that was made on that budget. There are a couple of scenes for me that look slightly out of focus and some of the transitions for me look amateurish.

The sound again has the odd variance that you would expect from a budget film but these are few and far between and don’t really effect your overall enjoyment.

There is the odd occasion when Glen Maney’s character is slightly too pathetic, but as this happens you are hit with another laugh, so the film JUST about gets away with that.

I loved the soundtrack and whilst full of original numbers, it’s in my opinion, better than a lot of higher budget soundtracks and I thought it helped the film to hide a few of it’s production weaknesses.

In short, this micro budget film is very dark but very, very, funny. I can’t remember a film where I’ve laughed so much in a long time.

How many stars would I give it? Probably three and a half out of five purely because of the production issues I’ve mentioned or it would have been a four.

I think if John Robson and Glen Maney get a budget behind them to do a project, it’s a project I’d definitely want to see based on the evidence of this little offering.

The film is available via distrify from the website TheLimelightMovie.com.

I streamed it but it’s easy to download or stream.  Check out the Distrify trailer here.  Be sure to check out The Limelight on Facebook and Twitter.
BIO:

UK-based Trevor Bassett is a freelance sports writer, having submitted to many publications, including several in the IPC Media Group.  Trevor also submits to several Football club match day magazines. 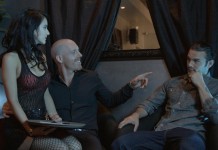 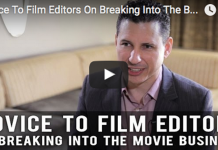