I’m sure that when I told people that I had a feature film that I wrote, and wanted to shoot someday they probably looked at me like many other filmmakers that talk about their beloved screenplays they’re working on but never end up taking the next leap of faith, and by that I mean Production.

Fast forward a few months and the news of my home province New Brunswick had just got rid of its film tax credit incentive that caused quite a bit of uncertainty for the local film industry, there I sat bored in my apartment watching Netflix and a film called American Movie was on. After watching that I found that it was oddly inspiring, seeing how excited and passionate Mark Borchardt was toward creating his horror films, with little money and using his resources around him.

After watching that movie I decided that instead of waiting and hoping that some Hollywood producer wants to buy my script and hire me on to direct it. I figured well Mark Borchardt made his film in the 90’s when the technology wasn’t anywhere near to what we have today, and that any excuse I could come up with not to shoot my script called Skate Proof was just that and excuse.

My background is in cinematography, that’s how I got into film in the first place so working as a DP on some low budget stuff I was aware of all the limitations that came with no budget filmmaking.

Now I’m not going to act like I wasn’t scared and knew exactly what I was doing going into with Skate Proof, because I was terrified at first but I was more excited than scared, so I went ahead and pooled my resources together that I had which was mostly asking friends for favors to work on the film over 7 weekends. That’s a big commitment to take away that many weekends from people’s lives to work on your dream, and I can’t thank the cast and crew enough for that.

Since I came from a cinematography background I decided I would DP the film and direct it, which looking back I probably wouldn’t do again as directing and producing are enough to worry about, throw in some lights and camera and you’ve got way to much to focus on but I eventually got used to it. 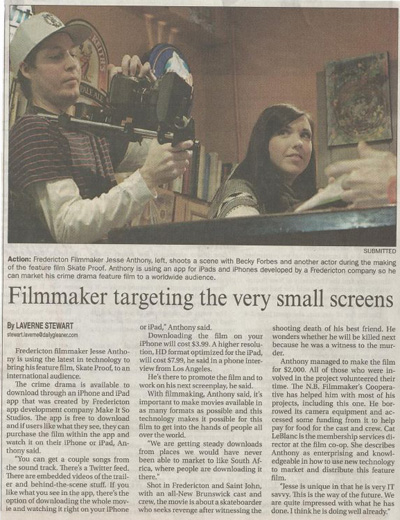 Article in Fredericton’s The Daily Gleaner (New Brunswick, Canada) about Skate Proof and the App developed by Make It So Studios

a
Probably the biggest thing that I tried to prepare for going into production was knowing that things aren’t always going to go as planned, so there’s no need to stress over logistics because the stuff that goes on behind the scenes won’t show on screen.

Oddly enough though thinking back there wasn’t any big show-stopper moments that happened during production, there was a few times that a location didn’t work out last minute or weather was bad, but the team usually figured ways around it. I don’t know if it was fate or just pure luck but any time we lost a location the new one ended up being better.

During the weekdays I would find time to edit a few scenes together and around the middle of the shoot I had a decent amount of the rough cut together. This is when I started to realize that the first 5-8 minutes of the film were completely shit and I couldn’t believe I wrote it. I panicked and quickly went back to the script and started to brainstorm how to make it better. I re-wrote the first 5 to 7 pages of the script and felt like it was a better fitting so then I had to break it to the cast and crew that we were getting rid of the old stuff and shooting new scenes. They saw my reasoning and thankfully they were down to re-do it without any hesitation.

After the first 2 weekends of shooting it felt like it was never going to end, not in a bad way but in an eager I can’t wait to see what it’s all going to look like way. But eventually that day did come the final day of production.

I’ll never forget that as that was the last time I had spoken with my friend and colleague Lex Gigeroff (Writer of the Sci-fi TV series LEXX)  who plays Joey Clams a bitter pizza shop owner in the movie,  passed away a couple weeks after that day. I’m thankful that I was able to work with him again before he left us.

When production was done I took a little break from the project came back to it 3 weeks later and started to edit everything together on my own in Final Cut Pro.  A month later I got to see my very first cut of everything together and was so sick of the project that I didn’t want to look at for at least another month, and that’s exactly what I did.

Finally a month later I went back and finished everything up and was ready to plan the release the film. I didn’t go into making the film blindly I did some research on distribution, and there was a lot of hype around self-distribution online.

Behind the scenes on Skate Proof with Lex Gigeroff

I was lured to this because I liked the idea of having control over the release and I think I’m fairly tech savy so with not a lot of money on the line having, or having to re-pay investors I figured I would roll the dice and try my luck at distributing the film my self.

And that’s where I’m at today, we released the film on May 6th and so far have done 2 screenings in the towns we filmed the movie in (Fredericton and Saint John, NB) and then released the film online with Createspace for Amazon, and Distrify for online streaming, as well as some hard copies of the dvd’s in a few local stores.

I also knew I wanted to have it accessible to iPhones and iPads so I began throwing some ideas around with my friends who develop apps ,and they were game to give it a shot and develop and app for Skate Proof.

I did some homework and saw that there were other films with apps out there, but my developer friends said what we should do different is make the app under 20mbs, as most film apps were 900mbs or more because the film is inside app when downloaded.

We saw this as a deterrent since it took so long to download and just to open an app, and view a trailer for a film you’ve probably never heard of before.

We created the app so it was a small initial download and people could check out the Skate Proof trailer and sample the soundtrack and check out the twitter feed, if they like the trailer then they can decide to pay and download either SD or HD versions of the film.
So will I even make back what I put into the project for craft, props and gas?  I’m hoping to but at this point I haven’t. The films only been out for 2 months at the moment and with the iphone app alone we’re getting some downloads from South Africa to China which are markets I don’t think I could have ever got the word out to with out the app, so maybe I’m onto something or maybe I’m not.

At the end of the day the whole thing was pretty much an experiment, as no one really knows where the film industry is headed, and regardless of what ends up happening with the Skate Proof, I’m glad that I somehow found a way to shoot, edit and release a feature film.

You can find out more about Jesse’s film Skate Proof and the iPhone app by going to:
SkateProofMovie.com
iTunes App
@SkateProof
Facebook 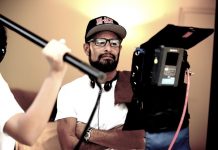 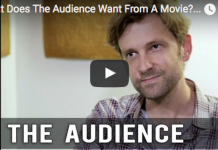