If you’d asked either of us a year ago what we’d be spending our time on come November, we never in a million years would have said, “Tiny Houses!”

We never could have predicted that we’d be building one from scratch and making a short documentary about people who live in homes smaller than the average parking space.

The truth is that we didn’t set out to make a film about living small. The story fell into our laps, as it grew from the questions we were asking ourselves everyday, about the kind of lives that we wanted to build for ourselves, and the places where we felt at home.

It all started back in February, when Christopher made an impulsive decision to buy a desolate piece of land in the Rocky Mountains. The five-acre parcel, located outside of a town called Hartsel—which is so remote that Merete couldn’t find it on her iPhone when she tried to look up the weather report—was part of Christopher’s longtime dream to put down roots in a landscape that he’d come to love. For years, he’d fantasized about a small cabin built from scratch by his own hands, but always put it off “until I’m older” or “when I have money.” Approaching his thirtieth birthday, the dream had begun to feel urgent and he decided to take a leap.

Meanwhile Merete, (somewhat incredulously) witnessing Christopher’s move to make his dream into something tangible, realized that his story could be used to tell the larger story of the growing “Tiny House Movement”—and to dive into the questions we’d been asking ourselves about what makes a home, feel like home.

Nine months later, Christopher’s tiny house is almost complete and our short documentary is well underway (and on Kickstarter until December 15!)

“TINY: A Story About Living Small” follows Christopher’s story of building his own tiny house from scratch with no building experience, and explores the lives of other families around America who have downsized their lives into houses smaller than 400-square-feet.

Having both spent much of our 20s traveling and moving to follow opportunities (Christopher toured with two bands and studied film in Australia, and Merete worked for a slow food travel company and researched environmental issues across the country), the idea that having less stuff frees us up to follow more interesting pursuits is nothing new.

We’re interested in issues of sustainability—both environmental and financial. As the frame of Christopher’s tiny house began to rise up and we dug into the movement around tiny living, we found people who are reshaping the American Dream to fit their own values and priorities. This often means buying a tiny home outright, or building one from scratch, to escape home loans and mortgage payments altogether. Tiny homes are often less costly and less time-consuming to maintain—which frees up time and energy to focus on family, time outside or in the community, running a small business or working on creative projects. (And no, not all tiny house owners are hippies, though some do own chickens and use composting toilets. And yes, we’ve seen tiny houses with flat-screen TVs and full plumbing too.)

Through this process of developing the film, we inadvertently stumbled on one of the most important lessons for any first-time filmmaker: Pick a subject that is meaningful to you, and also meaningful to a larger audience.

It seems obvious, but as creative types it can be easy to get wrapped up in a conceptual idea or a personal story that leaves outsiders thinking, Who cares?

Chances are, if you really do care, so will everyone else. But finding the story lies in narrowing down exactly where that care originates. For us, it all comes back to the question: “What makes a good home?” A question that is central to Christopher’s story of building his own, and central to the process of downsizing, as Christopher and our other characters decide what they want to surround themselves with, and what they can do without. It’s also a question that’s central to every single person who has ever rented or bought or re-designed a house, who has ever left a home or looked for a new one, who has ever started a family or searched for a place to spend the night. Basically: everyone.

In part, our success so far in reaching an audience and gaining exposure has depended on the large, passionate community that already exists around tiny houses.

We’ve also gotten lucky with our timing—just as Christopher was buying his land and deciding to build a small cabin from scratch, the tiny house movement was beginning to receive unprecedented media attention and interest from those not already in the know. (We arrived at our first interview, with tiny house builder Jay Shafer in Sonoma County, to find that a reporter from the New Yorker was also on the scene—he sat scribbling throughout our interview with Jay and the full feature article appeared in the magazine in July.)

But most of all, the success of our project goes back to meat, the flesh, the heart behind the whole shebang—which is based in those early questions that we asked ourselves about belonging and the places where we feel at home.
See more videos in this series with
Merete and Christopher here!

As filmmakers and storytellers, we’ll never stop paying attention to the questions that motivate us to make rash decisions and shape the direction of our own lives. Chances are there will be a project in each of them, just waiting to happen.

From now until December 15, we’re running a Kickstarter campaign to fund post-production costs of the film, including sound editing and the recording of our original score.

Merete Mueller is a writer and filmmaker based in Boulder, Colorado. She has worked as the editor of elephantjournal.com, an online journal devoted to sustainability and “mindful living,” and as a freelance journalist, essayist, producer, and project manager. “TINY” is her first film.

Christopher Smith is a filmmaker based in Boulder, Colorado. He studied Cinematography and Producing at the Sydney Film School in Australia, and has worked as a graphic designer and videographer in Colorado and Los Angeles. Feeling compelled to address some of the harder issues facing our world, Christopher uses his experience in media to call attention to issues of social justice and the environmental degradation of the American West. 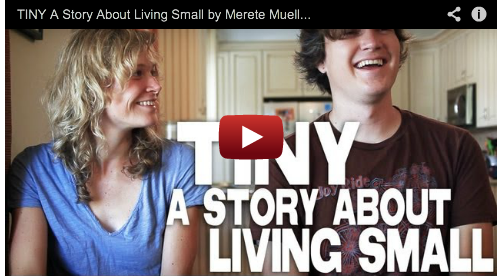 TINY: A Story About Living Small (Teaser Trailer) from TINY on Vimeo. 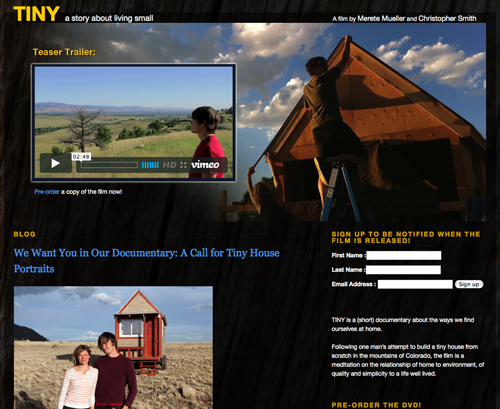 Christopher and Merete on ApartmentTherapy.com 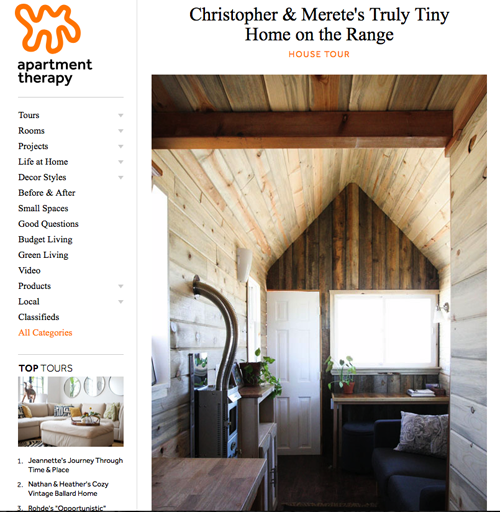 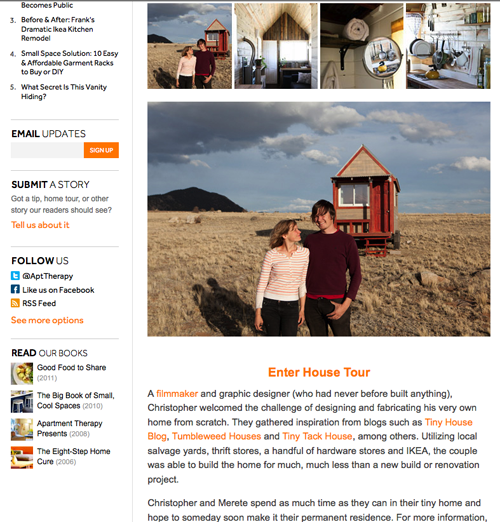 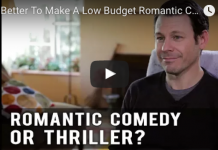 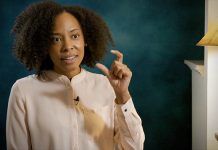