There was a time when I didn’t think much of my name. Nowadays Carrie is a pretty common name, used in many films and TV shows for the female protagonist, but when I was growing up the only popular association was with Stephen King’s horror story. Not exactly the image you want to invoke upon a first impression. And forget about my last name. Specht looks easy enough to pronounce, but more often than not, people make the mistake of softening the last three consonants, making my name rhyme with etch, or add an “R” so that it sounds like a German verb; “Sprechen sie Deutsch?” But my name does have the advantage of uniqueness, and as I first discovered in graduate school, your name is what you make it.

A long time ago (nearly twenty years), with the assistance of a small scholarship and a whole bunch of financial aid, I entered graduate film school with the idea of becoming an independent filmmaker. I was a producing major and only the second one ever in the graduate program, and the only one during most of my time at NYU. Being in high demand, I ended up producing some terrific shorts, most of which screened at major festivals. In fact, many went on to win some impressive awards, including two Student Academy Awards, a Princess Grace Award, an African American Student Filmmaker Award, and a Best Dramatic Film Award at the New York Short Film Festival.

As an Independent Major, I created my own program and I made mentoring one of my requirements. At the start of each new semester, I would visit the main production classes and offer up my consulting services to the students. I made it clear that I did not know all the answers but I knew how to find them. A lot of people took me up on my offer and I had some pretty strange requests (one was for a rare, exotic fruit), but I always managed to come through. Sometimes it took a bunch of phone calls and a whole lot of research. However, I got the information and saved the filmmaker valuable time for writing, story boarding or whatever else they needed to do to get their film made. In return, I asked that my name be used as a reference. It didn’t matter what it was for, from camera filters to end credits, I made sure that each student remembered to say that I, Carrie Specht, had recommended them. Eventually, it became standard practice for everyone (students and professors) to address me by both my first and last name, Carrie Specht, never just Carrie. In a funny way, it became a kind of a brand.

So, after four years, and over a dozen highly acclaimed shorts to my own credit (let alone all the other films to which I had been a special advisor), I was well respected by my graduate program and recognized by vendors throughout New York City. Discounts were often brokered based on my name recognition. No kidding. I got Christmas presents from the largest vehicle rental house in Manhattan. Another vendor provided me with my own in-box even though I had never physically stepped inside the building. And the thing that I thought was particularly amusing was the time I called a title house I had never directly worked with before, and the person on the other end of the line acted like I was Spielberg or something, saying, “This is Carrie Specht? The Carrie Specht? Oh my God! We’ve seen your name on so many end titles here, we were wondering who you were!”

I ultimately made good use of the notoriety and produced my last film in New York for virtually no money. It was a short film shot on 35mm, and because of my connections throughout the film vendor community, the only thing that cost us any money were two crew lunches, some cab fares, and subway tokens (I always have the filmmaker pay for crew travel – they’re working for free so they shouldn’t have to pay to get there). The total came to less than $300. Although many people said it couldn’t be done, and some vendors did turn down my request, stating that no one would provide their services for free, we stuck to our guns and got all of the major aspects of our production for FREE. And this was the film that not only won the Best Drama Award at the New York Short Film Festival, but also traveled to festivals all around the world, all because I realized the value of my name.

I think, more than anything, my experience in grad school showed me what the phrase, “getting your name out there”, means. You don’t have to start out big. You don’t even need to be the one benefiting the most from the situation, but the point is you’ve got to get your name out there, and the easiest way to do that is by using it. Eventually, that name, your name, will have a meaning of its own because of what you made of it.

Oddly enough, it wasn’t until 2002 when the man who would become the love of my life pointed out to me a sort of hidden motto within my name. It’s an idea I hope to live up to and one I’m sure my parents had no intention of suggesting, but I will always be grateful for the playful moniker. After introducing myself as Carrie Specht, my now husband offered, “Oh, you mean like care and respect?” I paused for a moment before I affirmed, “Yes, exactly like that”. You may not be as fortunate to have such an obvious alliteration within your name, but after working on it for a while, as you’re getting it out there, you may discover that your name’s true meaning was there all along.

Carrie Specht is a Union 2nd Assistant Director working in television. Carrie is also the creator and editor of ClassicFilmSchool.com, a website devoted to classic cinema, and RetroSpecht.com, a website offering opinions, thoughts and ideas about current films and culture. And every now and then she still shoots the occasional short film.

Behind The Scenes Of Horror Movie BETHANY with Producer / Actor... 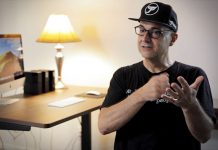