When I came up with the concept for A Year Without Rent, I kind of imagined myself getting to see all of the iconic places in the country. I’m not sure why I thought that. I hate touristy stuff (probably as a result of growing up in a state who’s #1 industry is tourism). I’ve been to New York City several times and it’s never occurred to me to go see the Statue of Liberty. Put me in a new city and I invariably want to go where the locals hang out.

But of all the American landmarks, I figured the Golden Gate Bridge would be one of the easiest to find (and take a picture of). A trip to San Francisco seemed inevitable (especially since Sean Gillane got his project on the calendar before we even started the Kickstarter campaign), and it seems like a landmark that’d be kind of hard to avoid. I never thought we’d be filming at the Golden Gate Bridge, but that’s exactly what we’re doing. Of course, we have no permit. So the first thing I do is take a lap around the area, trying to look like as much of a tourist as possible, and scope out where our potential problems might come from. It’s really similar to the approach criminals take when they’re checking out a target. Where are the police? Are there security cameras? Where might the police come from, should they be called?

It’s always kind of fun. At least, I think so.

And yes, we’re filming very close to the spot where they filmed VERTIGO. There’s two things. One involves a conversation on the sidewalk. It looks innocent enough. Sean, Katherine, and Ken Fisk (who’s now pivoted from VFX Supervisor to Gaffer) can hide in the rocks just below the sidewalk, the trick being to keep the boom as inconspicuous as possible. Nothing gives away a film production quicker than a boom waving around. The second part is a little harder to hide. Sean is on top of a car (as you can see) and Lisa is pretending to do damage to the picture car. Basically, we’re saying “please come stop us”. But no one comes. We get a lot of strange looks. A couple from Dallas stops to talk to us and they end up doing a scene as the owner of the car. Another guy apologizes for watching with the explanation that he’s from Iowa. From there, we’re in a really remote location across the bay, on this walking trail that’s literally at the very edge of the country, seemingly as far west as you can get in the Bay Area without being in the Pacific Ocean. Barges float by every couple minutes on their way to Asia. It’s a really beautiful location. It’s also really fucking cold. There’s a really cool old neglected dock that Ken and I are convinced we can walk down to, but Sean talks us out of it. It’s a shame, because the photos would have been fantastic. What we’re filming, I can’t talk about for content reasons, but it’s easily the hardest single thing we’ve tried to shoot so far. It’s a combination of physically demanding, emotionally demanding, in freezing cold weather, trying to do something pretty precise. It’s the sort of thing where the person operating the camera has to slate because everyone else is holding something that’s either heavy or in the exact spot it has to be in. Or both. And we’re racing the light. Let’s see if I can tell this story without giving anything away.

I look over my shoulder. There’s no way I’m not in this shot.

Later that night, I looked at the footage. Sure enough, I was clear of the frame. To this day, I have no idea how. Maybe some of that VFX magic at work. Filmmaker Lucas McNelly is spending a year on the road, volunteering on indie film projects around the country, documenting the process and the exploring the idea of a mobile creative professional. You can see more from A Year Without Rent at the webpage. His feature-length debut BLANC DE BLANC is now available to rent on VOD. Follow him on Twitter: @lmcnelly. 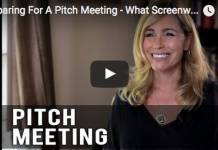