April 30th 2011 I got in a car accident. No one was injured. But it dramatically changed my perspective on many things. I’ll explain more later…

Many of you had read my articles on Film Courage about the “micro-pilot” medium concept. Most people didn’t entirely understanding where I was going, others completely grasped the definition. The value of definitions pales in comparison to the value of results. So the big question is: What was the point of a micro-pilot and what is the desired results?

The micro-pilot I made was for a TV pilot for a show called AWAKENING.

It’s intentionally 3:47 long. Just long enough for an audience to watch, react, retweet or share on Facebook. But even more importantly was that it was designed to be noticed by either a studio, investors or an independent producer. It worked! About two weeks after it was posted on you tube, with the benefit of people sharing it with their Facebook friends, someone shared the link with independent film producer Bill McKinney. One of his most recent successes was a film shot in Detroit called, “Corner Store.”  The nice thing about him is that he understands Indie Filmmakers but has ties with distributors. He watched AWAKENING and immediately contacted me. We started discussions and now we are focused on producing The House in September.

That’s the good part of the story. But this didn’t happen overnight. 2008 I went to Maine to search for investors. Since the story was set in Maine I figured the best investors I’d find would be people from that state that wanted to see Maine in a positive light. I had a producer who joined up named Phil Cronin. He took me to Greenville, Maine because he believed it was the perfect location. He was right! You can’t buy a beautiful landscape like that. No CGI can truly capture that beauty. Less than six months later Phil died of a heart attack.

The struggle had continued to find the right people. Many times I gave up on the project and turned my focus else where. But for some reason I kept coming back to the script. I started loosing track of how many drafts that it went. All I know is I‘m somewhere over 10.

Then came the production of AWAKENING. One of my greatest experiences so far. In this experience I learned a very valuable lesson. There is some really great talent right here in Michigan where I reside. Everything I was looking for was right here in my big backyard called Michigan.

The day I posted AWAKENING on you tube I sent out a casting call to see who was interested in my next feature film. I got a tremendous response, especially in a state where the tax incentive was basically yanked out from underneath the burgeoning film industry.

We did our auditions in Ann Arbor, Michigan. And out of the auditions I found those few people who fit perfectly what I was looking for. I look for more than just talent when I look at an actor. What I want to know is whether they fit exactly, or close to exactly how I saw that character. I’m also looking for real passion for the film. One of the things that surprised me was how many people thanked me for doing the auditions and focusing on how talented Michigan actors are. While other filmmakers were leaving the state, I decided to stay.

Then came my meeting with Bill McKinney. And in that meeting one thing came up: crowd funding. Even though we were going to bring traditional investors into the project, we wanted to bring the audience along as well as a movement of people who believed in making something unforgettable.

The launch date of our Kickstarter campaign was scheduled for May 1st, 2011…

If you remember my statement in the beginning, I was in a car accident on April 30th, 2011. How did it happen? Simple. I have been running on empty for a very long time. I have been pushing things forward, basically non-stop, since post-production of my last feature in 2008. If you burn your candle at both ends, eventually there’s no candle left… I was really tired that day. 4 hours of sleep, 8 hours at my day job, going to pick up beds for my kids before launching the kickstarter campaign. (btw, also ended up with a sinus infection). I ran a stop sign by accident on an intersection that was posted at 50 mph. This is Michigan, so the driver was probably going at least 55 when I crossed the road. It was a miracle no one was hurt. But I probably totaled my car. Even more than that my perspective changed. I had taken many risks in the past for “the sake of art“. But at the end of the day I’m just a human being, I’m not invincible. I can’t do everything. 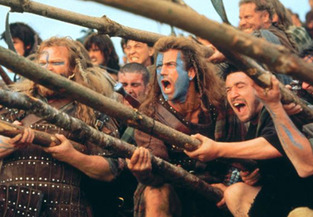 Imagine William Wallace, in the movie Braveheart, goes into The Battle of Hastings against the English, and instead of assembling a whole army, he just shows up with that “big huge sword“. He taunts the English. They charge at him… then what. I know, he’s Scottish and he’d take as many of them with him… but he’d loose. The beauty of the story of Braveheart was that he was able to take the passion for his homeland and kindle the same fire within his brethren. That is what the filmmaker must do. Yes be passionate, yes work hard. But be the champion for you film and lead the movement forward… don’t be a lone ranger.

I’m moving forward! With my team assembled and others that will join we will make something extraordinary (because it‘s about “WE“ not “ME“). My passion is to revolutionize the way filmmaking is done. That has always been one of those things that drive me forward. IF you love what I am doing, please join us by spreading the word about our crowd funding campaign or even consider donating to the cause. I’m not backing down, and neither is my team, but we can’t do it alone.